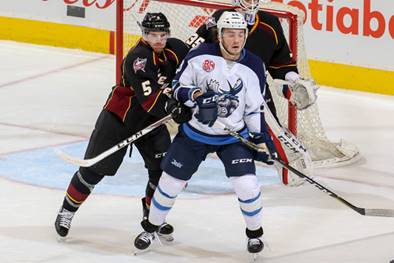 The Cleveland Monsters were defeated by the Manitoba Moose on Saturday at Bell MTS Place in Winnipeg, MB by a final score of 4-0.

With the loss, the Monsters fell to 7-8-2-2 overall this season and with a .474 points percentage, remain alone in fifth place in the AHL’s Central Division standings.

Manitoba grabbed a 2-0 lead in the opening frame when Julian Melchiori rifled home an even-strength goal at 6:52 before Jack Roslovic redirected a power-play score past Cleveland goaltender Matiss Kivlenieks shortly thereafter at 7:57 of the first.

In the middle stanza, Michael Spacek’s extra-man marker at 8:19 made it 3-0 Moose and in the third, a Nic Petan power-play offering capped the scoring in a 4-0 Moose win at 8:11 of the period.

Kivlenieks fell to 2-5-1 between the pipes for Cleveland despite stopping 26 of the 30 shots he faced on Saturday, while Manitoba’s Michael Hutchinson posted his first shutout of the season and improved to 9-1-1 in net this year by virtue of a 27-save performance.