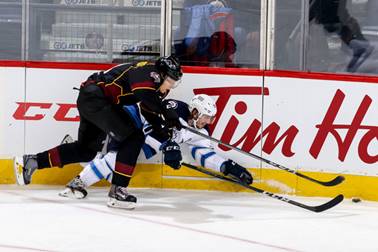 The Cleveland Monsters, proud American Hockey League affiliate of the NHL’s Columbus Blue Jackets, were defeated by the Manitoba Moose on Thursday at Bell MTS Place in Winnipeg, MB, by a final score of 7-1. With the loss, the Monsters fell to 7-7-2-2 overall this season and with a .500 points percentage, Cleveland remains alone in fifth place in the AHL’s Central Division standings.

The Moose grabbed a 1-0 lead on Thursday when Michael Spacek logged a power-play goal at 19:50 of the opening period. In the second, Manitoba ran their edge to 3-0 with back-to-back even-strength markers from Chase De Leo at 12:25 and Mason Appleton at 14:00 before Cleveland’s Sam Vigneault posted a five-on-five tally, assisted by Miles Koules and Calvin Thurkauf at 14:46, to make it 3-1.

The Moose continued their onslaught at 15:46, however, as Buddy Richardson’s even-strength goal made it 4-1 Moose and Julian Melchiori potted a five-on-five wrister at 16:27 to push the Moose edge to 4-1.

In the third, Manitoba’s Peter Stoykewych buried an unassisted even-strength marker at 1:07 to make it 6-1 Moose and Jack Roslovic scored at five-on-five at 12:23 to cap a 7-1 victory for Manitoba, extending the team’s league-wide season-long winning streak to eight games.

Cleveland’s Brad Thiessen fell to 4-2-3 in net this season after allowing five goals on 16 shots faced through 36-plus minutes on Thursday before being pulled in favor of Matiss Kivlenieks, who stopped seven of the nine shots he faced the rest of the way. Meanwhile, Moose net-minder Michael Hutchinson improved to 8-1-1 between the pipes this year by virtue of a 34-save performance.

Next up for the Monsters, it’s a Saturday rematch vs. the Moose, with full coverage, live from Bell MTS Place in Winnipeg, MB, underway at 8:00 pm.