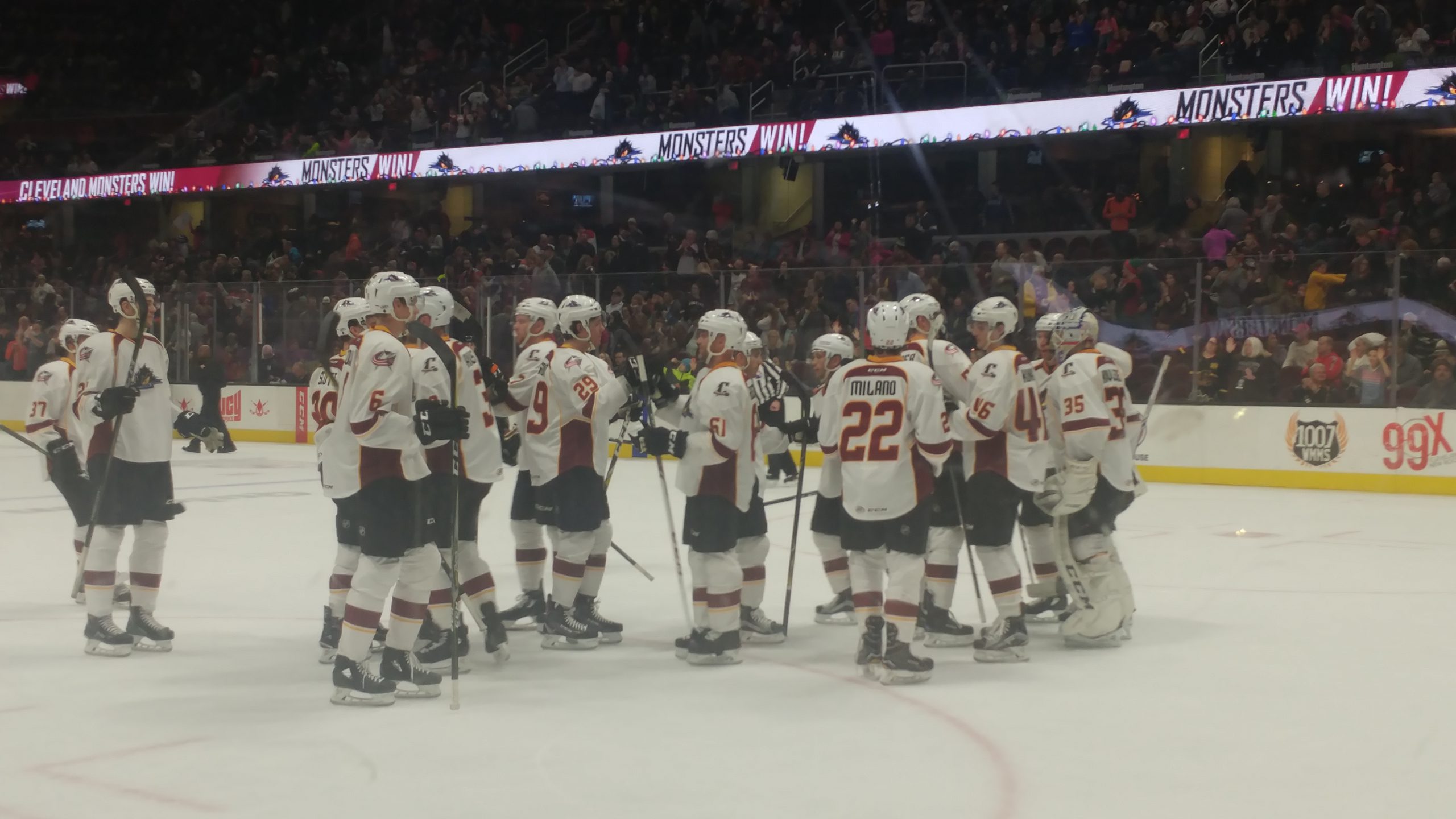 CLEVELAND, Ohio- The Cleveland Monsters took the ice Friday night for a Central Division clash against the Chicago Wolves. The Monsters were looking to get back to .500 on the season, where Chicago had been struggling heading into their twenty-second game of the 2017-18 season. This would be a good opportunity for Cleveland to get back on the right track against a team unable to get any sort of footing early on.

It was also “Chuck-A-Bear” night at The Q, meaning that whenever the Monsters scored their first goal or the second period came to a close, fans all around the arena would hurl their stuffed animals onto the ice to help make a family’s Christmas this December. The anticipation that fans had would build throughout twenty minutes of action but fail to provide the moment they were anxiously waiting for. Cleveland would only register five shots to Chicago’s fourteen and the Monsters would have to defend their zone a man down twice in the period. Though the circumstances were far from favorable, both teams held firm and finished the period scoreless.

The middle stanza is where Cleveland did their damage. Carter Camper decided to free the teddy bears from the seats with a top-shelf marker at the 4:58 mark of the second period. Camper continued his success that’s been built in the beginning stages of the campaign. The Ohio native had four goals and eight assists for a total of twelve points heading into the weekend and leads the Monsters in points on the year. After losing linemate Tyler Motte to Columbus within the first few weeks of the season, Camper found other ways to make his impact on the game and has been a great part of the new-look Monsters.

Chicago would tie things up in a jiffy, as Griffin Reinhart unleashed on the puck from the blue line to send it flying over the shoulder of Cleveland goaltender Matiss Kivlenieks at the 7:21 mark of the frame. The Monsters would retaliate quickly. Reinhart’s marker would keep the game tied for just over a minute until Alex Broadhurst and Sonny Milano crashed the crease to overwhelm Kaskisuo for the score. Broadhurst fired the puck and it went off the Chicago goaltender for the go-ahead goal. Cleveland would head into the break leading Chicago, 2-1.

Paul Bittner iced the game with a marker that should have been a no-doubter but instead turned into a heated debate. Bittner slapped home the puck past Kaskisuo but was never rewarded the goal. Play continued for a brief moment before the question arose: Did Bittner score? After heavy analysis and a decent amount of time spent looking at the replay, the officials made it clear that the play resulted in a score and that Bittner should be credited for his fourth goal of the season. It separated the two teams enough for Cleveland to hang on to a 3-2 victory, as Reinhart beat Kivlenieks for the second time in the final minute. The Monsters would battle for the victory, being outshot 38-26 and only manufacturing one power-play goal out of their six opportunities.

There’s a lot of positives but overall, I think that we could be a lot better.” said Monsters Head Coach John Madden following his team’s win. Madden has been pretty vocal even after winning performances that he believes that the team can still clean up areas of their game to be a dominant club.

One area that was definitely not lacking was attacking during vulnerable moments. Carter Camper got the night going for Cleveland with his goal from the right faceoff circle and to him, Friday’s game had a pretty special moment for him.

Camper continues to roll in his first professional season at home, becoming a true definition of the term “workhorse”.

Cleveland goaltender Matiss Kivlenieks worked extremely hard as well Friday and was able to put together another solid performance.

“The first period, I had quite a few shots. I got into the game really quick and ever since then, it just went good.” Kivlenieks said after his thirty-six save performance that showed the value he provides for the squad.

The Monsters will once again welcome Chicago to the ice at The Q on Saturday, this time at 1pm. Cleveland is now 8-8-2-2 and continues to find success on home ice.

43.9 seconds left in the first unleashed the bears