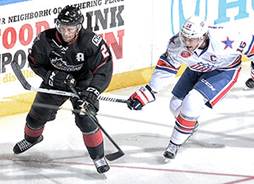 ROCHESTER, NY – Cleveland’s Lake Erie Monsters, proud affiliate of the NHL’s Columbus Blue Jackets, were defeated by the Rochester Americans on Friday at Blue Cross Arena in Rochester, NY in the Monsters’ 2015-16 season opening game and the first of four head-to-head meetings between the two teams this year. With the loss, the Monsters fell to 0-1-0-0 overall this season.

The Americans started quickly, posting back-to-back even-strength goals at 1:26 and 3:11, from Jerome Leduc and Jason Akeson respectively, to claim an early 2-0 lead. The Monsters responded at 7:08 of the first when Lake Erie captain Ryan Craig tipped home his first goal of the season, a power-play tally assisted by Michael Paliotta and Oliver Bjorkstrand, to draw the Monsters within one. Rochester answered back mid-way through the frame when Mike Ellis guided a one-time transition marker past Lake Erie goaltender Anton Forsberg to push the Amerks’ lead back to a pair of goals at 3-1.

In the second, the Monsters flexed their muscles and posted two unanswered scores to tie the game at three heading into the final frame of regulation thanks to an even-strength laser at 1:42 from Markus Hannikainen, assisted by Alex Broadhurst, and a power-play finish from Dean Kukan at 17:48, assisted by Broadhurst and Kerby Rychel.

In the third, Dan Catenacci posted the first of three final-frame goals for Rochester on the power-play just 47 seconds into the period before Ellis potted his second and third of the night, at 12:27 at even-strength and at 18:42 into an empty net, to establish the Americans’ 6-3 margin of victory. Forsberg made 18 stops for Lake Erie in defeat while Rochester backstop Nathan Lieuwen made 35 saves to earn the victory.

Next up for the Monsters, it’s “Opening Night” at The Q with puck drop set for 7:00 pm on Friday vs. the Iowa Wild with the first 10,000 fans taking home a Monsters and Blue Jackets Collectors Cup, courtesy of University Hospitals Parma Medical Center