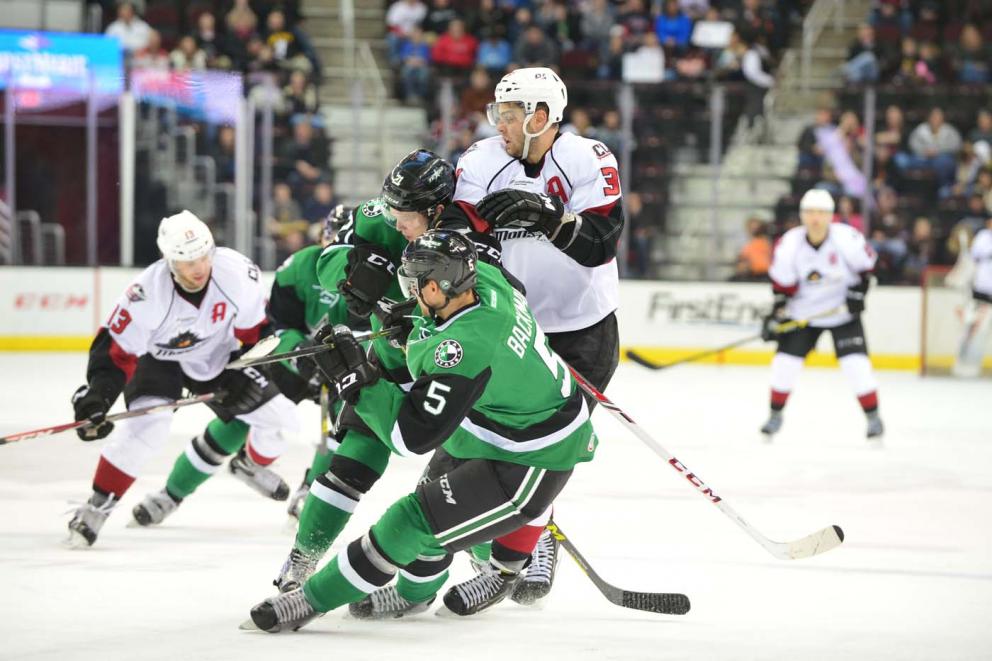 CLEVELAND – The Lake Erie Monsters (22-15-4-3) hosted the Texas Stars (24-17-3-3) for game two Saturday afternoon from the Q. The Monsters won game one last night 3-2. The game started off a little chippy with Monsters defensemen Eric Roy landing a big check into the board right off the bat.

Both teams had to be broken up after stoppage multiple times early on afterwards. In addition to the hitting, both teams were aggressive shooting the puck, tying with 13 shots a piece for the period.

Oliver Bjorkstrand was the player that stood out the most for the Monsters. He got a direct pass off the faceoff and made a nice move to get himself into scoring position but unfortunately found a Stars defender with the shot.

Anton Forsberg also made a nice save for the Monsters with the Stars having a three on one against him and coming up with the clutch save to keep the game at zero. However, Roy got his pocket picked in his own zone by Radek Faksa who put away the goal to give the Stars a 1-0 lead. Both teams were also plagued by committing a penalty early on during a power play and the first ended 1-0.

The second period was led off by T.J. Tynan getting a chance to score off his own rebound but pulled it wide left. Shortly after, Michael Paliotta went back to the locker room after taking a stick to the face from Remi Elie. He was assessed a double minor and the power play was not looking to go how the Monsters wanted.

They had very little opportunities and Forsberg had to make a big save to avoid giving up a shorthanded goal. With under a minute remaining on the power play, the Monsters finally broke through when Roy scored on a shot from his defensive position.

Upon review, the goal was correctly changed to Trent Vogelhuber who deflected the shot in front of the net. The tie was short lived, as Texas was able to sneak a shot that trickled past Forsberg by Curtis McKenzie.

The Monsters had one last chance to tie it back up before the period ended, but Lukas Sedlak’s shot was stopped by a leg save. The second ended in a 2-1 Stars lead and both team added another ten shots on goal respectively.

The Monsters needed an aggressive start to the third if they wanted to come out with the victory. They had a great opportunity with an early period power play against the second worst penalty killing team in the AHL.

The power play finished to no avail. Fortunately, the Monsters did tie it up when Daniel Zaar tipped a John Ramage shot up and into the net to even the score at two.

The Monsters chances continued to climb during the period. They had another power play go to waste almost halfway through the period.

Tynan and Bjorkstrand both had great open shots during the period as well, but one found the glove and the other the goalie’s chest to prevent the Monsters from taking the lead.

Forsberg also made a big save himself to keep it tied up. The game took a turn for the worst when Vogelhuber picked up a penalty. The Stars on the power play took a shot that sailed over the net and ricocheted perfectly off the glass and back over the net straight to Faksa who put it right into the net for his second goal of the game and the game winner.