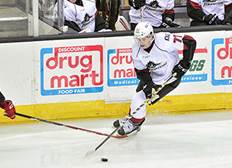 CLEVELAND – The Monsters left a sour taste in the Griffins mouth last game they played with an overtime shootout victory, so the Griffins seemed to take more of a physical approach to this game, which would prove to be all for not, because the Monsters were out for blood as well.

Despite a choppy and slow start to the game for the Monsters and being on the defensive for the first 5 minutes of the period, Sonny Milano would get the team started with a long distance upper 90 wrister for his 3rd goal of the season; Andrew Bodnarchuk and Jaime Sifers would get the assists.

The Monsters would find their rhythm in the 11th minute thanks to a Josh Anderson goal assisted by Ryan Craig and a beautiful back hand pass through two defenders across the crease to make it 2-0 Monsters.

Then less than 2 minutes left in the 1st, Ryan Craig scores his 3rd goal of the season off Alex Broadhurst and Michael Chaput assists to give the Monsters a 3-0 lead going into the 2nd period.

In the 7th minute of the 2nd period, the Monsters would continue to pile on the shots and run up the lead with a Josh Anderson goal, 3rd of the season assisted by TJ Tynan; and with 1 second to go in the period, Daniel Zaar would score his 3rd goal of the season going upper 90 on the Griffins goaltender Tom McCollum and put the Monsters up 5-0 at the end of the 2nd period; the assist would go to Michael Paliotta.

Come the 3rd, the Griffins would finally respond with a goal of their own from Colin Campbell assisted by Andy Miele…and that would be it for the Griffins.

Jonas Korpisalo would record 37 saves on the night, anchoring the Monsters 5-1 victory over the Griffins of Grand Rapids. And oh yea, one Curtis ’50 Cent’ Jackson attended the game and was an honorary “puck dropper” for Salute the Troops Night.

Go figure. Perhaps Curtis ’50 Cent’ Jackson is a lucky charm for the Monsters because the Monsters offense, defense, and goal tending were all around ‘Outta Control.’ Bottom Line: Good team win.