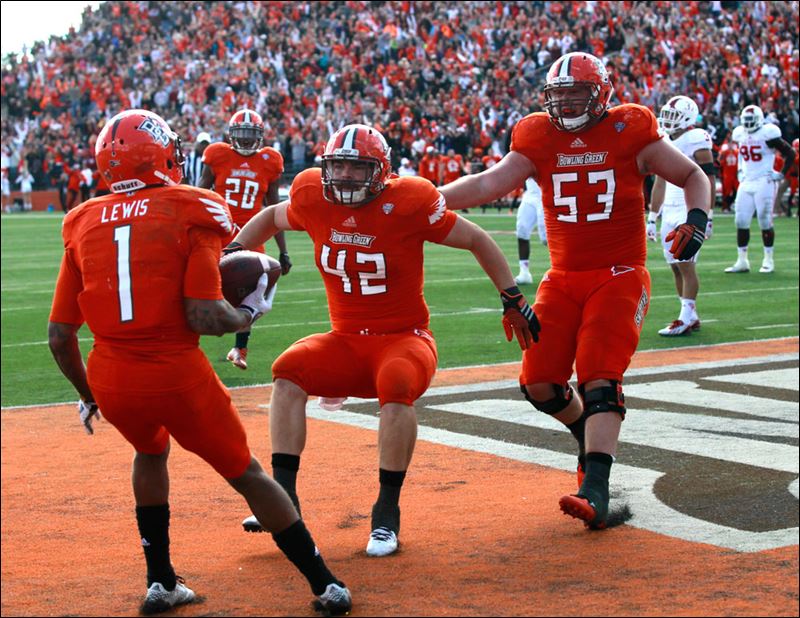 Here are the weekly award winners from the first full weekend of Mid-American Conference play:

Bowling Green sophomore wide receiver Roger Lewis (Pickerington, Ohio) caught 10 passes for 201 yards and a touchdown in a 28-22 win at Buffalo.  It was Bowling Green’s fifth straight win over Buffalo and 13th consecutive against MAC East foes.  Lewis, who leads the country in receiving yards with 760, it was his third 200-yard performance in the last four games. He is the first player in school history with three 200-yard receiving games in his career, which he has accomplished in a four-game stretch. He is one of two players in the country with more than 600 receiving yards and is now tied for fifth in receiving touchdowns.

Ohio sophomore linebacker Quentin Poling (Spencerville, Ohio) led the Bobcats defense to a 14-12 win at Akron to open MAC play. The Bobcats defense held the Zips without a touchdown and 0-4 in red zone touchdown attempts as the defense had a season-high eight tackles for loss and six pass breakups. Poling had a game-high 11 tackles and two tackles for loss, including one sack for a loss of eight yards. Poling also recorded his first interception of the season picking off Akron quarterback Thomas Woodson and returning the pick 16 yards down to the Akron 16-yard line.

Akron senior kicker Robert Stein (Cincinnati, Ohio) scored all 12 of the Zips points in a 14-12 loss to Ohio.  Stein had a career-high four field goals, including a season-long 41-yarder in the third quarter. He also kicked off five times for 295 yards (59.0).

Toledo sophomore running back Terry Swanson (Aliquippa, Pa.) carried the ball a career-high 24 times for a season-best 139 yards in a 24-10 win at Ball State.  Swanson topped the century mark for the first time this season and third time in his collegiate career.

Central Michigan senior linebacker Tim Hamilton (Bloomfield, Mich.) made 11 tackles, one tackle for loss, one interception and one recovered fumble in a 29-19 win over NIU.  Central Michigan defeated NIU breaking the Huskies 15-game road MAC winning streak. Hamilton also created a pair of critical third quarter turnovers that led to touchdowns as the Chippewas outscored NIU 23-3 in the quarter. Hamilton recovered his first career fumble early in the third quarter and added his first career interception later in the quarter. The senior also had one tackle-for-a-loss.

Central Michigan junior kicker Brian Eavey (Grand Ledge, Mich.) on a windy and rainy day at Kelly/Shorts Stadium, Eavey had a career-high three field goals including a career-long of 44 yards in a 29-19 win over NIU. Eavey converted field goals of 44 yards, 28 yards and 41 yards.  His 41-yard kick into the wind in the fourth quarter gave Central Michigan a critical 16-point advantage. He was also 2-for-2 on his PATs.