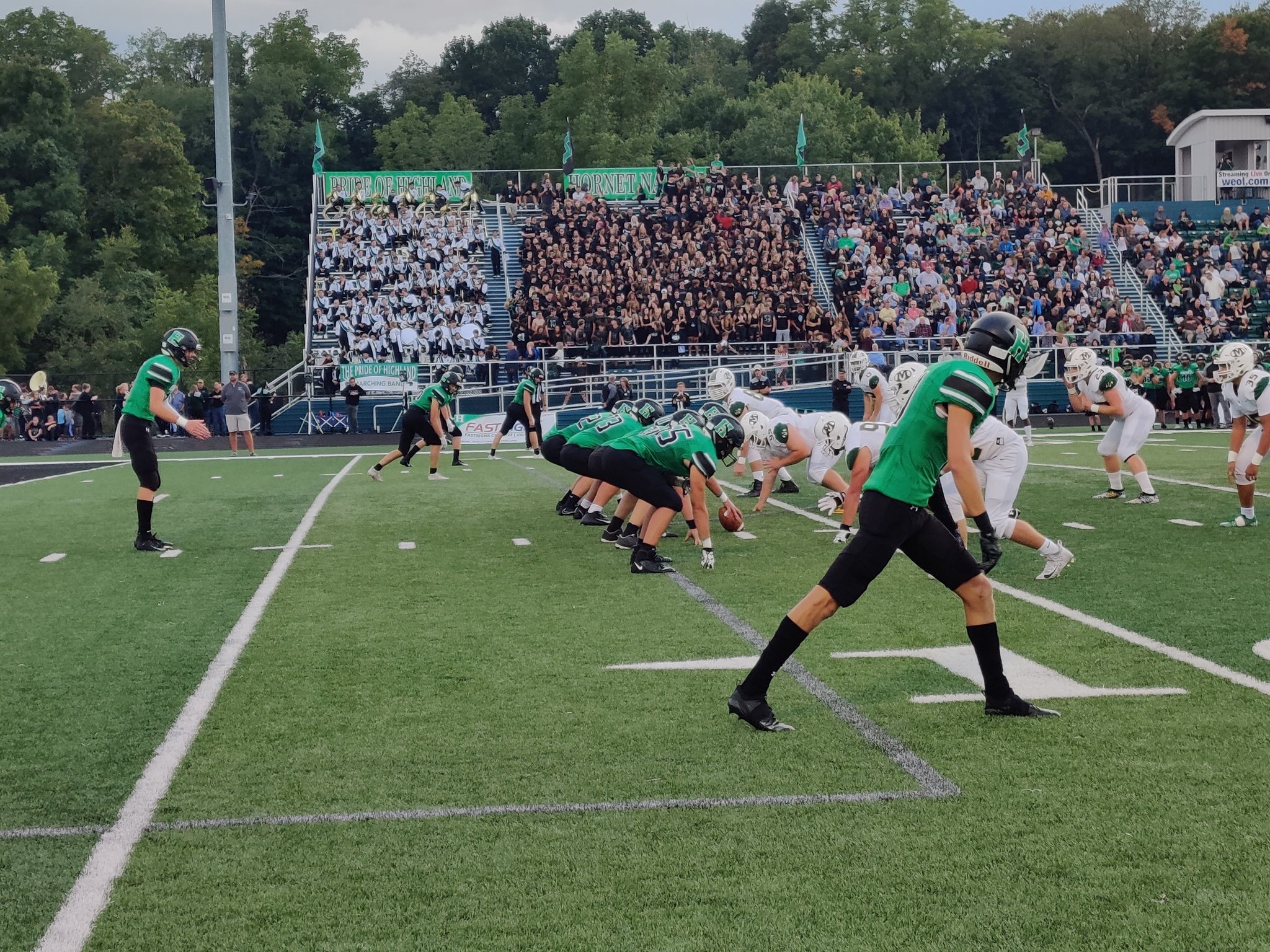 MEDINA, OHIO – At the end of four quarters, the Medina Bees battled their way to sting the now 0-2 Highland Hornets’ home-opener 31-0 to progress to 2-0 on the season.

Leading the way for the Bees, was their defense. Even though the Hornets were able to drive down the field on numerous possessions, their defense bent in ways people would think were impossible and shut them out in the defining plays.

“I thought our defense really stepped up when it counted,” head coach of the Bees Larry Laird said after the win. “All night long, they kept making play-after-play. They did bend a little bit, but they made the plays when it counted. Those ‘money downs’ are the ones we gotta win and I thought we won more ‘money downs’ tonight.”

Highland did not convert a single fourth down in the game. Some of those plays were in the red zone.

The Hornets often rushed Bees’ quarterback Ryan Gillespie with three defenders. This gave Medina plenty of time to throw and helped them score two touchdowns in the first half.

“Over the middle routes, the linebackers would be spreading out. Then, we just knew that we’d have guys over the middle for the entire first half. If there was pressure from the inside, I would roll out and buy more time. Overall with the offensive line, with only the three-man rush, they did excellent.”

Gillespie threw three touchdowns in the game. All of them were to different receivers.

The first to get in the end-zone for Medina was Dylan O’Dear for a nine-yard receiving touchdown from Gillespie in the first play of the second quarter.

Gillespie’s second touchdown pass was to Nick Yandy in the second quarter from 13 yards and the third was to wide receiver Luke Hensley from five yards.

Hensley caught 11 balls for 145 receiving yards and a touchdown. His season total in two games is 17 receptions, 260 yards, and three touchdowns.

“Last week, he is a first-year starter for us and I thought that the game slowed down for him in his head, which is very important.”

“We know we are going to face different types of defenses. Our kids know how to react. All of our routes have built-in route concepts for all those defensive looks.”

They would end the first half with a 22-yard field goal from Bees’ kicker Ryan Miller to make the score 17-0 at the half.

Highland on the offensive end was shut out when it came to the scoreboard, but they were able to move the ball effectively, using their quarterback Bryce Profitt and their running back Brady Linder.

Linder was the driving force for the Hornets on a drive in the third quarter that led them to scoring position.

He was injured after a 15-yard run up the middle after the defense was called for a face-mask penalty. Linder limped off the field from a right leg injury, but would return to be one of the featured players to what the Hornets could salvage offensively.

He finished the game with 98 rushing yards off of 18 carries, and 25 receiving yards from three receptions.

Medina’s next matchup will be against Wadsworth. Highland will face North Royalton next week.