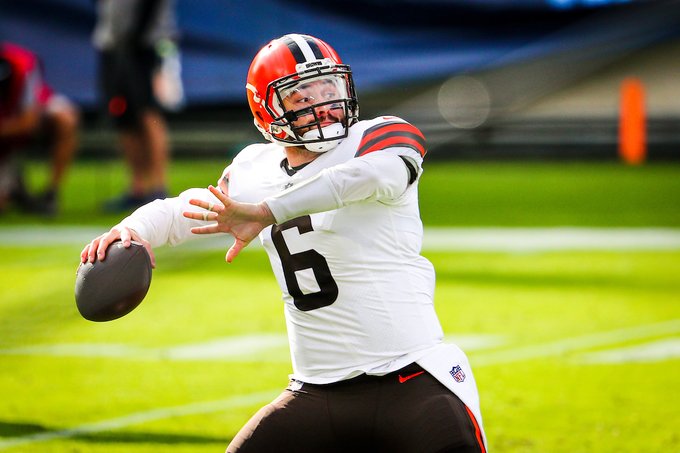 The Browns went down to Nashville for a big time matchup with the Tennessee Titans Sunday. In the land of country music, it was the Browns offense rocking the house in the first half behind a Baker Mayfield four touchdown first half. The Browns led 38-7 at the half, and despite a big surge from the Titans in the second half, they would hold on late to win 41-35.

The Browns opened the game on offense, driving right down the field inside the Tennessee ten yard line. However, a Donovan Peoples-Jones drop would kill the momentum, forcing a Cody Parkey field goal for a 3-0 lead.

After the score, an 18 yard second down pass from Ryan Tannehill to Corey Davis gave the Titans a first down near midfield. The Browns defense tightened up during the next series of downs, stopping monster running back Derrick Henry short of the line to gain on fourth and one.

After the turnover, Mayfield and the offense stayed hot. A healthy mix of run and pass marched the offense down the field before Mayfield found Jarvis Landry in the back of the end zone for a two yard touchdown pass.

Taking over at the Tennessee 21, the offense took its time to take advantage of the turnover. After an encroachment penalty put the ball within inches of the goal line, Kevin Stefanski dialed up trickery for the score. As Mayfield found eligible lineman Kendall Lamm in the end zone to put the Browns up 17-0 just into the second quarter.

The Titans offense finally got going in the second quarter, striking quick with their next possession. After a 40 yard catch by Corey Davis set up a first down in the red zone, Tannehill found Davis again for 17 and a touchdown, as the Titans scored in four plays to cut into the early deficit.

Despite momentum seemingly swinging the other way, Mayfield stayed hot to find Peoples-Jones for a 75 yard bomb on the first play of the next possession to go up 24-17.

The defense returned to form after the score, forcing a quick three and out to give the ball
back to the hot handed offense.

The offense was the hot hand indeed, as they once again followed Mayfield down the field. Capping things off with a 17 yard Rashard Higgins touchdown, Mayfield’s fourth touchdown of the first half.

With the big lead intact, the first half running game for the Titans had to be put on hold. The defense stayed on the task at hand tough, forcing another three and out after a Malcolm Smith third down sack.

Taking over with just over four minutes to go in the half, the Browns offense looked to deliver what they hoped would end up being a knockout blow before the half. Doing just that, the Browns took only 9 plays before Nick Chubb found the end zone, jumping over the pile for a one yard score to put the Browns up 38-7.

Desperation set in for the Titans with under a minute to go in the half, needing a score to stay alive in the game. Tannehill found some success short and in bounds but the Defense played it safe over the top. With 10 seconds left the Titans tried to find A.J Brown over the middle, but Brown would get chased down and forced into a fumble to end the half.

The Titans came out of the half with the ball and caught fire, putting together three plays for 75 yards and a touchdown. Tannehill found Davis for 43 yards down to the Cleveland 22, before finding Pruitt for the score on the next play.

On the other hand, the Cleveland offense came out sluggish to start their second half, going three and out on the ensuing possession.

Taking over after the quick turnover, the Titans went to work at hyper speed once again, scoring in six plays to now only find themselves down 38-21 early in the third quarter.

Needing anything to halt the newfound Titans’ momentum, the Browns found the way behind a 29 yard run from Chubb to add in a field goal to go up 41-21.

The Titans began to slow down with the next possession, taking significantly longer to move down the field. However, a bobbled pass from Adam Humphries fell right into the arms of M.J. Stewart for a Browns’ interception.

Despite the quick change in possession, the offense failed to produce, going three and out to force a Jaime Gillian’s second punt of the game in the fourth quarter.

The defense continued to stiffen up into the fourth, as a third down sack from Myles Garrett forced a three and out.

After the three and out, the Browns offense would go run heavy to put together a long nine play drive that lasted nearly eight minutes and bleed much of the fourth quarter.

Following the long time consuming drive, Tannehill and the Titans took over with just under three minutes to go in the game, driving 91 yards for a late score to cut the lead down to 41-28.

The Titans needed an onside kick down two scores, however the Browns were able to recover. Unfortunately for the Browns they couldn’t convert a first down on four tries. On fourth down, Stefanski dialed up a sneak for Mayfield to ice the game. Despite Mayfield having the yardage on the play, he would be stripped on the play to give the Titans hope with the ball.

After the turnover, Tannehill would only complete one pass, a fourth down conversion for an eight yard touchdown to Cameron Batson to cut the lead to six.

The Browns would go onto to recover another onside kick after the score, to set up a Mayfield kneel down to seal the 41-35 win over the Titans and move to 9-3 on the season.