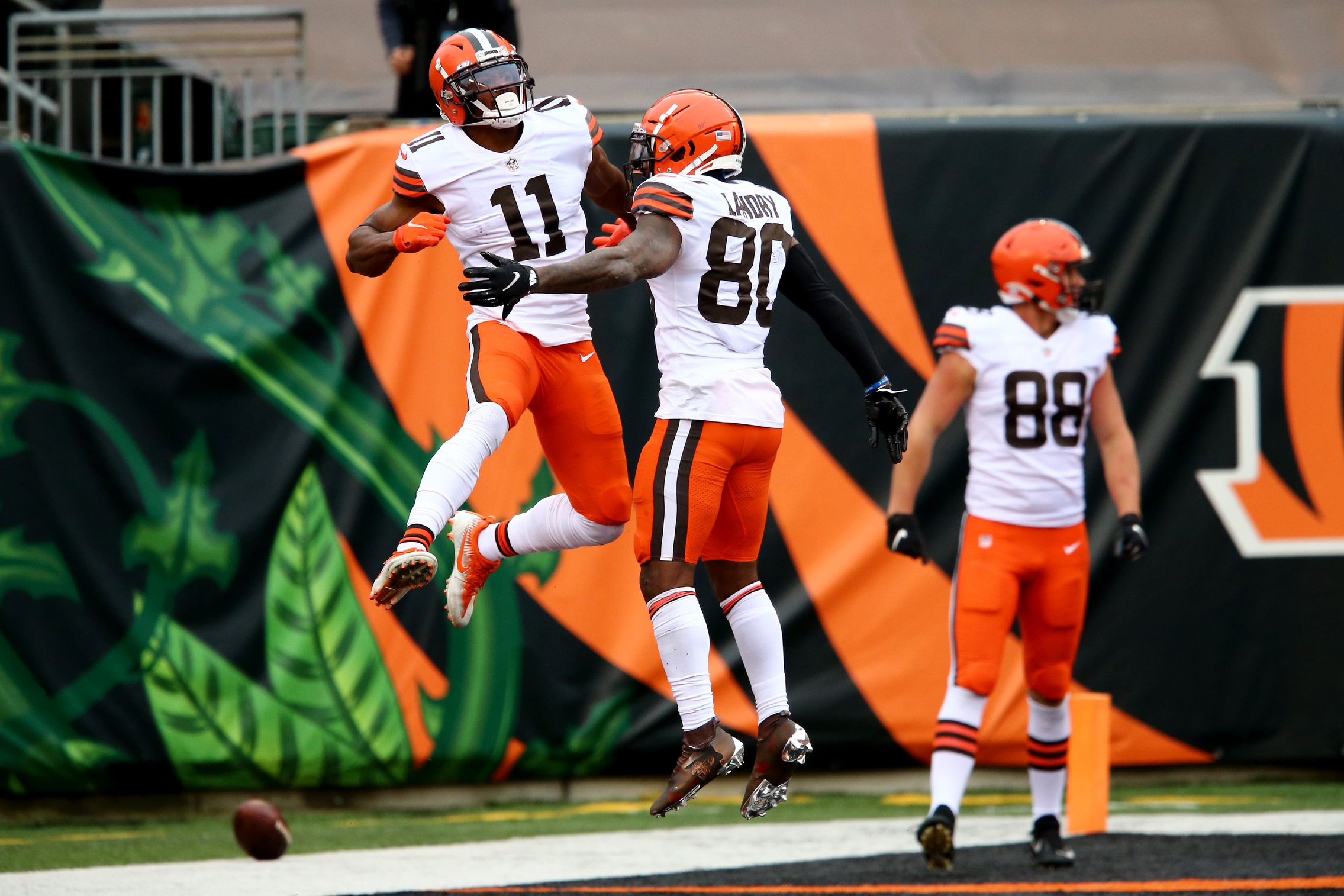 The Cleveland Browns traveled to Paul Brown Stadium to take on the Cincinnati Bengals in a 1:00 p.m. AFC North matchup. After a rough start, Baker Mayfield would shake it off to put together a stellar five touchdown performance to lead the Browns to a 37-34 victory.

The Browns won the toss and deferred to Joe Burrow and the Bengals offense to open the game. Burrow led the Bengals all the way down to the Cleveland two yard line, setting up first and goal to take an early lead. However, linebacker B.J. Goodson intercepted Burrow on the first down throw on a tipped ball by Denzel Ward to give the Browns offense the ball at their own four.

A six yard run from Kareem Hunt opened the Browns’ first drive to give the offense a little breathing room. To no avail, as disaster struck on the next play. Mayfield was looking deep for Odell Beckham Jr. down the right sideline, but left the ball short and Bengals corner Darius Phillips made a play on the ball to intercept Mayfield.

Unfortunately the interception wouldn’t be the only blow on the play. On the return, Beckham Jr. made an effort to run down Phillips, injuring his knee in a collision that pulled him out of the game. Center J.C Tretter would also go down on the play, but would return later in the game.

The Bengals took advantage of the turnover with their next possession. Burrow found Tyler Boyd on first down for a 13 yard connection to the 11 yard line, before a pass interference penalty on Kevin Johnson on the next play would set up first and goal at the one. Bengals head coach Zac Taylor dialed up a quarterback sneak to put Burrow in the endzone on the next play to give the Bengals a 7-0 lead.

Following the score, another impressive 11 yard first down run from Hunt would move the chains. Hunt would continue to pound the ball on the next play, however two straight incompletions on second and third down would force a Browns punt.

Burrow and the Bengals offense went on the move again on the ensuing drive, setting themselves up with a first down at the Cleveland 42 after a 22 yard connection from Burrow to Boyd. However, after an incompletion brought up second down, a Myles Garrett strip sack would give the Browns the ball back in Cincinnati territory.

Despite the good field position, Mayfield continued to struggle to find his receivers early. Adding in two more incompletions to start 0 for 5 on the day, and forcing the Browns to settle for a Cody Parkey field goal after the turnover.

The Bengals offense took over just before the end of the first after the field goal, driving right down the field into the second quarter. Facing a first and 10 in the redzone, the Browns defense stood tall, forcing a second down incompletion, before a Kevin Johnson sack forced a field goal to go down 10-3.

The Browns first possession in the second quarter was a healthy mix of Hunt and Mayfield for an impressive nearly eight minute touchdown drive. The Drive took 11 plays, and a perfect Mayfield, before being capped off by a three yard touchdown catch by rookie tight end Harrison Bryant to tie the game.

After giving up the lead, the Bengals looked to score late in the second to take a lead into the half. Burrow would account for every play on the possession, as he carved through the Browns secondary to set up first and goal. A Garrett first down sack seemed to have halted momentum and put a field goal at play for the Browns defense, however Burrow bounced back immediately to find Boyd in a tight window in the endzone to take a 17-10 lead into the half.

Mayfield continued his turnaround to start the second half , opening the quarter with a 35 yard connection to Bryant to go into Cincinnati territory. Mayfield and Hunt would combine to continue to drive all the way down to set up third and three from the Cincinnati six. Mayfield would cap off another drive with no incompletions on the next play, finding Bryant once again to tie the game at 17.

The momentum seemingly began to shift toward the Browns, however Burrow and the Bengals would respond after the tie, going on a long twelve play drive, before settling for a Randy Bullock field goal and a 20-17 lead.

The Browns offense continued to stay hot to take the lead with the next possession. Mayfield went five for five for a third straight drive to tie his career high 15 straight completions, finding David Njoku over the middle for 16 yards to take a 24-20 lead early in the fourth quarter.

Facing their first lead of the game, the Browns defense continued to lose the battle against Burrow and the Bengal offense. The Bengals drove right down the field, only threatened once by a dropped Terrance Mitchell interception. Despite the close call, Burrow stayed confident before later finding Tee Higgins across the middle for a 16 yard touchdown to take back the lead.

The defense surrendered the Browns first lead of the game immediately, however the Browns offense stayed hot. Taking only seven plays before Mayfield found Hunt for an easy eight yard touchdown scamper to take a 27-24 lead. Mayfield continued his streak of straight completions on the he drive, setting the franchise record at 18 straight completions.

The Browns took the lead with just under five minutes to go in the game, however the defense continued to struggle against the Bengals offense. Once again Burrow drove the Bengals down to take the lead, capping off a 10 play drive finding Giovani Bernard on a three yard touchdown pass to convert on fourth down and take a 34-31 lead with just over a minute to go in the game.

Facing the deficit with very little time and no timeouts, it was up to Mayfield to put together a game-winning touchdown drive. Mayfield would only need five plays before finding rookie Donovan Peoples-Jones for a toe-tap 24 yard touchdown to take a 37-34 lead.

A hail mary attempt with five second left in the game from Burrow would be a last gasp effort. To no avail as the pass would be broken up, as the Browns beat the Bengals 37-34.