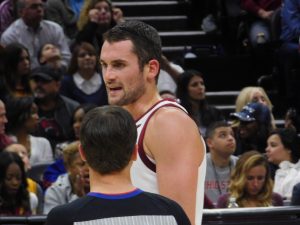 The story of this game Kevin Love breaking a bone in his left hand.

With 7:19 remaining in the first quarter, Love was removed from the game, and according to a release from the Cavaliers, he suffered a non-displaced fracture in the fifth metacarpal of his left hand.

We won’t know his status until tomorrow when he undergoes additional examination, but he could be out as long as six to eight weeks.

The void the Cavs will need to fill is a big one, as the All-Star is having his best season as a Cavalier, averaging 18.2 points and 9.6 rebounds.