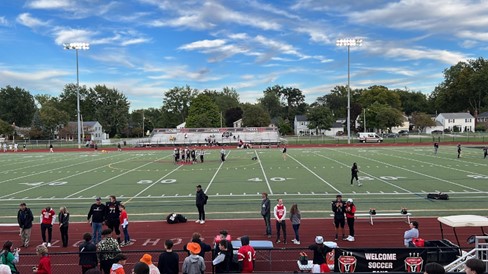 On a beautiful fall night for football, Lutheran West welcomed Wickliffe to Alumni Field. The Longhorns were hosting the Blue Devils for their homecoming game. There were plenty of alumni that packed the stands praying for a Longhorn victory. Wickliffe was looking to knock Lutheran West off in a massive upset chance.

From the opening kickoff, Lutheran West was in control of the game. On their first drive, Senior Quarterback Clay Noble found Derek Fairley in the end zone from 29 yards out. After forcing a quick Wickliffe 3-and-out, the Longhorns blocked the Blue Devils’ punt. Sophomore Di’Marion Gill recovered and scampered into the end zone for 6. Last year, Gill led the state of Ohio in sacks with 15.5 in his freshman season. On Lutheran West’s next offensive possession, Noble found Fairley again. This time for a 25-yard touchdown. Fairley added another touchdown later in the first quarter. Quarterback Jalany Theodore found him on a 23-yard touchdown pass. The Longhorn defense, led by Senior Richard Luecke, did not allow a single first down in the opening quarter. Luecke is a Senior lineman that is currently uncommitted with multiple D1 offers. At the end of the 1st quarter, Lutheran West held a commanding 31-0 lead.

On the first play of the second quarter, Jalany Theodore found his brother Jayden for a 2-yard touchdown. Wickliffe was able to get on the board after a long drive was capped off by a 1-yard touchdown run by Sophomore RB Nunzio Zivnoska. However, Derek Fairley struck again for the Longhorns. On the ensuing kickoff, Fairley hit paydirt on an 84-yard TD return. This closed the scoring for the half with the Longhorns leading 45-6.

Longhorns Run Out the Game

With a running clock for the rest of the game, both teams did not have much time to possess the ball. On Wickliffe’s opening drive, Lutheran West recovered a fumble. The recovery was made by Jayden Theodore who took it to the house for a touchdown. Early in the fourth quarter, Junior running back Alex Vangelos scored on an 11-yard touchdown run. This capped off the scoring for the Longhorns. The Lutheran West defense continued to stand tall. They did not allow Wickliffe any breathing room. Late in the game, Sophomore linebacker Cortlon Campbell found himself in the Blue Devil backfield on multiple occasions.

Next week Lutheran West will look to continue their winning ways as they travel to Trinity to take on the Trojans. Meanwhile Wickliffe will look to get back on the right track when they take the field at Crestwood.

Player Of The Game