SOT had a jammed packed show from Zs cream and bean in Hinckley.  First, they talked to the Amherst Comets Baseball team who finished their season with a 25-5 record. It was a school record this year in which they won the SWC (Back to Back 2017, 2018).  They talked to Head Coach Matt Rositano, Catcher- Hunter Cassidy, Pitcher-Evan Shawver, Shortstop- Ryan Glowacki,  and Catcher-Aaron Gonzalez.   Click the link below to listen to the interview.

SOT also talked to the Brunswick Men’s Soccer Team.  They are coming off a season in which they were ranked in state as high as #15.  They also had their Second Consecutive Undefeated, Untied GCC Championship 7-0-0.  Brunswick Beat Medina and Strongsville for the first time since 1988.  SOT talked to Head Coach Ben Dotson, players,  Cole Parete (Midfielder), Justin Hagler (Midfielder), Ryan Utrup (Midfielder), and Aaron Ogorzaly (Defender).  Give it a listen! Click the link’s below to listen!

Here are a few pictures from our guests at Zs! 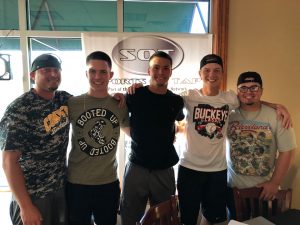 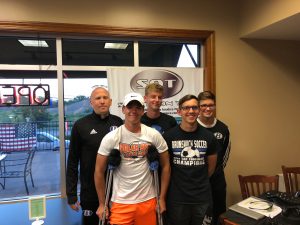 Brunswick Men’s Varsity Soccer (Ranked as high as #15 in the State Poll).

Want coverage?  Have ideas for our show?  Contact us at sportsontappodcast@gmail.com.