LeBron Leads The Way in Game 6; Cavs Advance to NBA Finals with 113-87 Victory Over Raptors 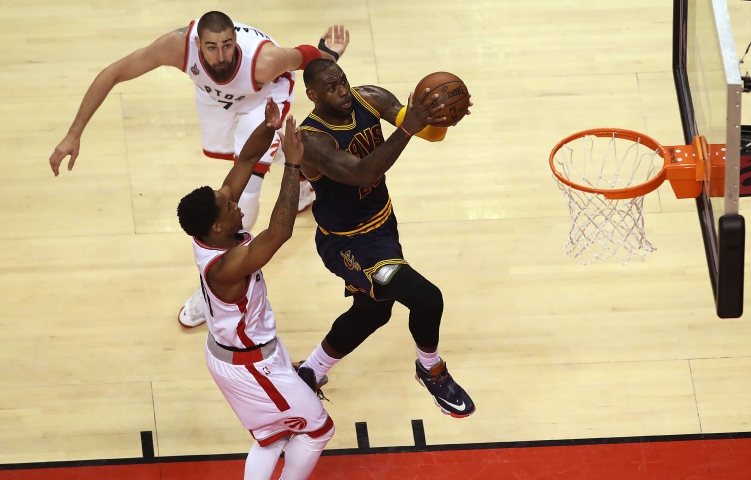 The Cleveland Cavaliers advanced to the NBA Finals for the second-straight season, defeating the Raptors 113-87 in Game 6 of the Eastern Conference Finals on Friday night.

It was LeBron James, who had his best offensive performance of the playoffs, leading the way with some help from his friends, Kyrie Irving and Kevin Love.

LeBron scored 21 points in the first half, helping Cleveland enter the break with a 55-41 lead.

Irving dished out seven assists in the half, which was more than any of his previous five games in the series.

Love was already close to a double-double by halftime, scoring ten points to go with nine rebounds.

Irving and Love did the bulk of the scoring in the third quarter for the Cavs, as the duo combined for 22 of Cleveland’s 31 points, getting the lead up to as many as 21.

It was Kyle Lowry carrying Toronto’s offense, scoring 18 points in the quarter, including nine straight points in the final two minutes to cut it down to an 86-74 game heading into the fourth.

DeMar DeRozan would cut it down to a 10-point game to open up the fourth quarter.

LeBron and Irving would respond, building the lead back up to 16 with 8:38 to play, causing Dwane Casey to call a timeout.

Lowry hit a clutch three-pointer, his sixth of the game, to give his team some life.

J.R. Smith hit a deep three, followed up by Irving to get the lead up to 21, all but sealing Toronto’s fate.

Lowry fought back, but the Cavs would not bend and held on to win in dominant fashion by a score of 113-87.

Irving, AKA Mr. 4th Quarter, lived up to his name, scoring nine points in the final period, finishing with 30 on the night. He also dished out nine assists, his highest total of the 2016 playoffs.

LeBron finished with 33 points, the most he has scored in the playoffs this year. He also grabbed 11 rebounds and dished out six assists.

Love posted a double-double with 20 points and 12 rebounds. The Big 3 combined for 83 points.

Lowry scored 35 in the losing effort, while his fellow All-Star, DeRozan, scored 20.

LeBron is headed to the Finals for the sixth-straight season and the Cavs will make their third appearance in franchise history.

Now the Cavs await their opponent, as the Oklahoma City Thunder lead the Golden State Warriors 3-2 in the Western Conference Finals.

Home is Where the Heart Is: Raptors Look to Make it 5 for 5 in Toronto Against Cavs
Mark Trumbo’s 2-run shot sends Orioles past Tribe 6-4