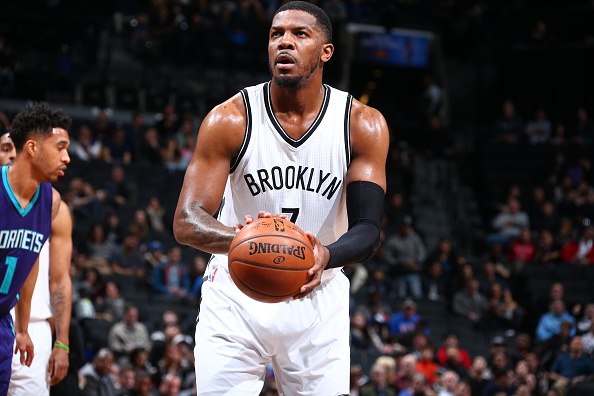 It sounds like LeBron James is well on board with the Cavaliers reported interest in just dumped veteran guard Joe Johnson, who worked out a buyout with the Brooklyn Nets on Thursday.

Johnson will be free to ink with any team on Saturday, and various reports say the Cavs are one of those teams that are looking to pickup the swingman.

Today following shootaround in Toronto before the Cavs take on the Raptors, Jason Lloyd of the Akron Beacon Journal wrote that James is all for getting Johnson to join the Cavs.

“He knows that we want him,” James said. “If he decides to come here, it’d be great. If not, then we’ll continue to move on with what we have,” James stated.

Johnson and James have played together, as they were teammates on the 2006 FIBA World Championship which came in third. Lloyd explains that James was in the corner of the Cavs getting Johnson last summer in a trade, but the $25 million dollar contract Johnson had was too much for the Cavs to take on.

Now we will see if what James wants, James gets, and if the Cavs can close the deal with Johnson this time around once he becomes a free agent and clears waivers tomorrow.

Lue Says He Expects Shumpert To Play Vs Raptors; Guard Says He’s Not So Sure
5 Reasons Why the Cavs-Raptors Game Friday Night in Toronto Is Not “Just Another Game”