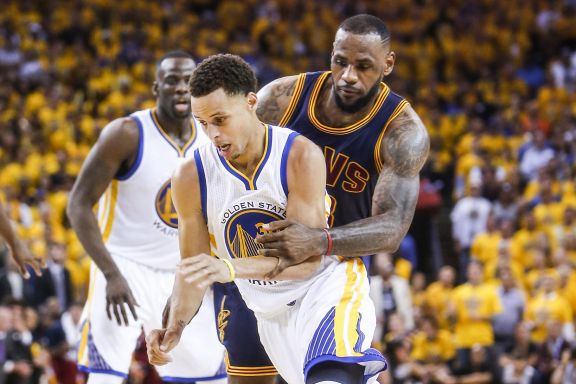 LeBron James today spoke to the media at Cleveland Clinic Courts as the Cavaliers practice to get set to play either the Miami Heat or the Toronto Raptors in the Eastern Conference Finals.

James, as to be expected, was asked about Tuesday’s announcement about Golden State Warriors guard Steph Curry, who yesterday was named the MVP of the NBA.

Curry was the first ever player to win the award with all 131 first-place votes, something that most Cavs fans are not happy about.

James though didn’t hold back in saying he felt that Curry deserved to be named the best in the NBA.

James finished third in the MVP voting overall, behind both Curry and Kawhi Leonard of the Spurs.

Despite that, it won’t matter who the MVP is if the Cavs can find a way past either the Heat or Raptors, and then take care of business in the NBA Finals, something that eluded them a season ago.

BREAKING NEWS : Anderson Silva pulls out of UFC 198 Fight Against Hall
Indians Fall 5-3 to Astros in 16 Innings; The Good, The Bad, and the Mostly Ugly from Wednesday’s Marathon