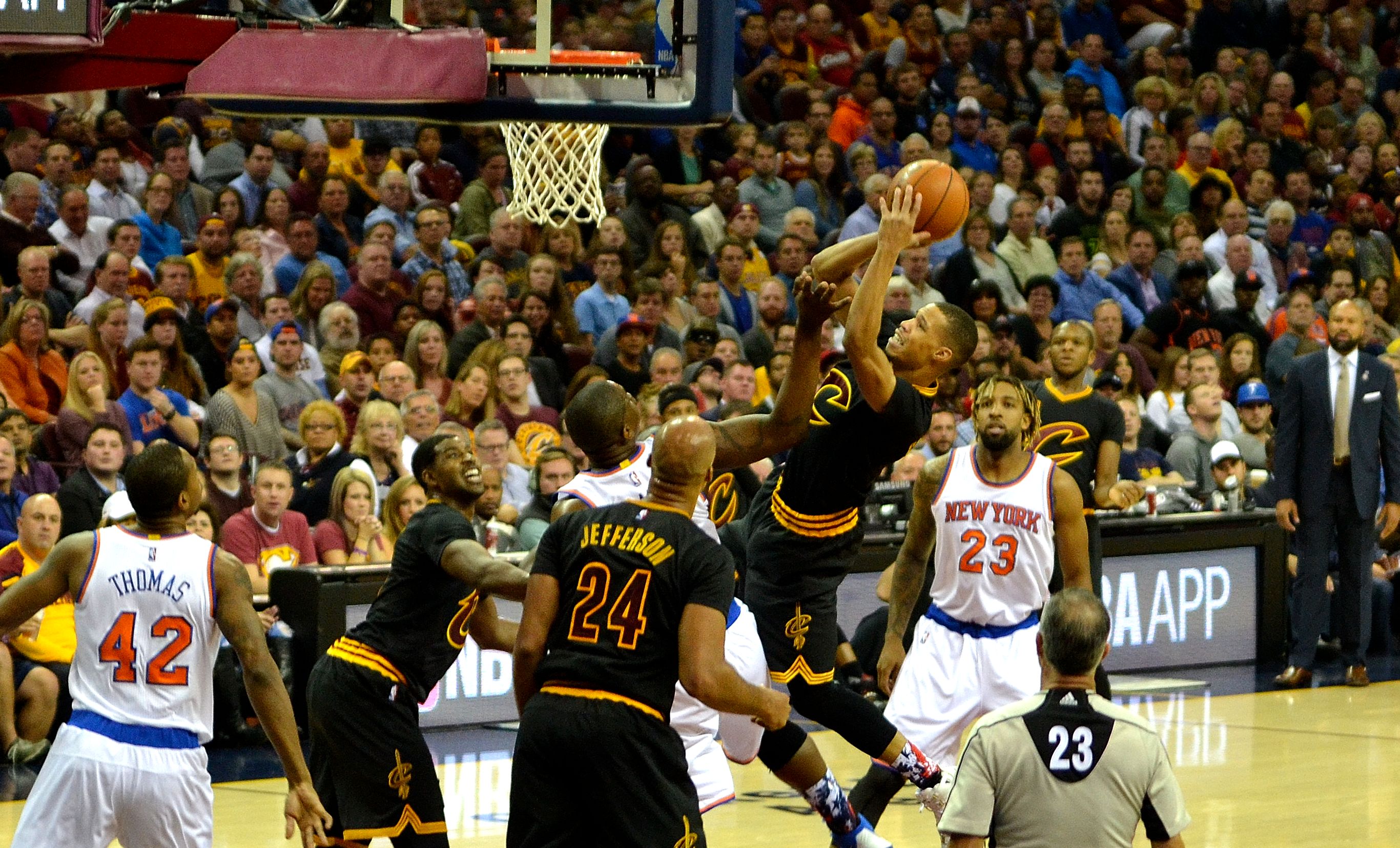 CLEVELAND – The Cavs defeated the New York Knicks Wednesday night at the Q 96-86, overcoming a slow start for the second consecutive game.

The Knicks got out to a good start leading 13-2, before Cavs point guard Mo Williams hit three shots in a row to cut it down to a 15-9 game.

New York would go on a 7-0 run before LeBron James ignited the crowd with two breakaway dunks, but the Knicks kept pace and led by 14 at the end of the first quarter.

It was the second game in a row where Cleveland got out to a slow start, after trailing to Philadelphia by an identical score of 32-18 at the end of one. 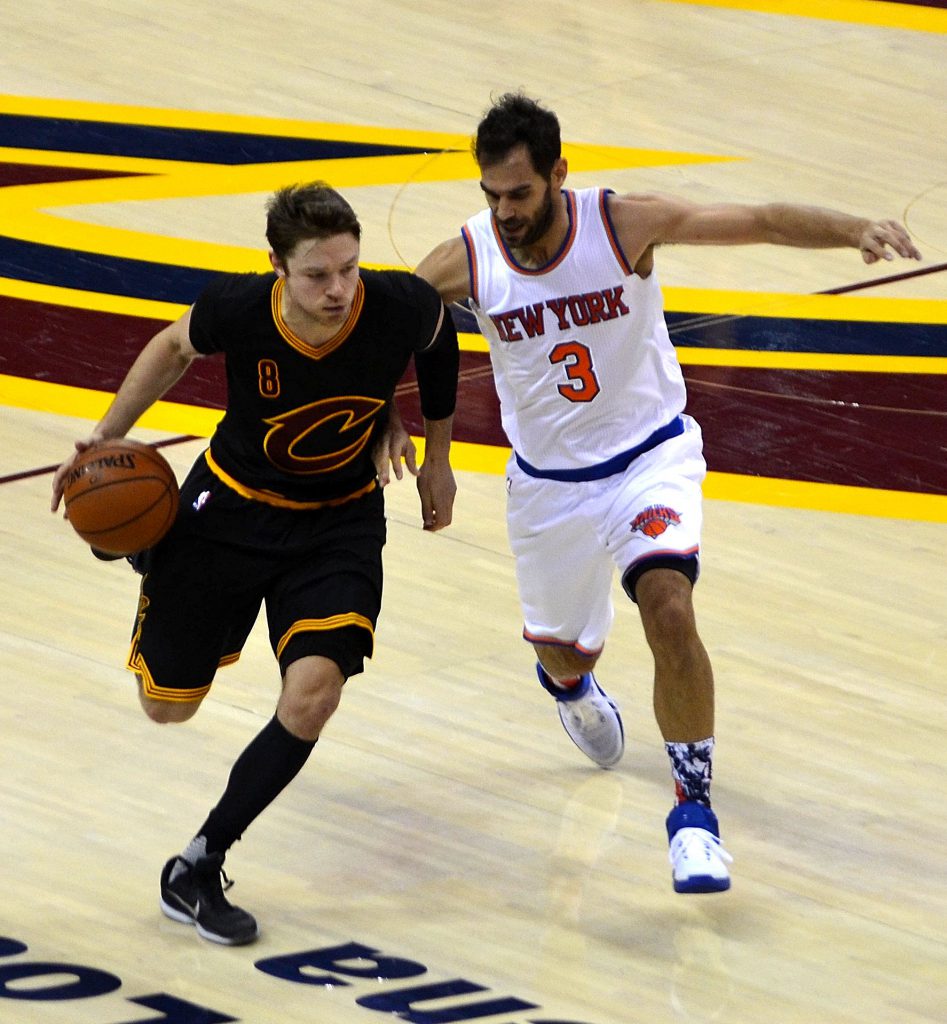 Midway through the second quarter, LeBron attacked the basket on back to back possessions drawing and-one opportunities both times to get five quick points for the Cavs, and make it a nine-point game.

Richard Jefferson, making his first start of the season, filling in for the injured J.R. Smith, along with Timofey Mozgov propelled the Cavs to a 6-0 run to make it a three point game, but rookie power forward Kristaps Porzingis responded with a putback slam to put the Knicks ahead 42-37 with 2:47 remaining in the half.

New York would close out the quarter and head into halftime with a 46-38 lead.

The Knicks benefited in the first half from another good performance by Carmelo Anthony, who entered halftime with seven points and nine rebounds, coming into Wednesday night averaging 23 points in the first four games of the season.

New York’s bench made a big impact scoring 18 of the team’s first 46 points in the first half, as opposed to just 5 bench points for Cleveland.

Shooting guard Sasha Vujacic was a thorn in the side of the Cavaliers early in the game, leading all scorers with nine points in the first half.

The Cavs came out of the gate with sloppy play to start the second half, letting Porzingis and Anthony have their way early in the third quarter to widen the gap to an 11-point Knicks lead.

Anthony led the Knicks with 17 total points on the night and Porzingis contributed 13.

Cleveland struggled to get into a rhythm offensively, but midway through the third quarter, the Cavs went on a run to cut the deficit to one, sparked by a big three pointer from Jefferson.

The Cavs would tie the game with just over two minutes left in the third, but the Knicks regained the lead on the next possession.

Tristan Thompson finally gave the Cavs their first lead of the night with 51 seconds remaining in the third quarter, with 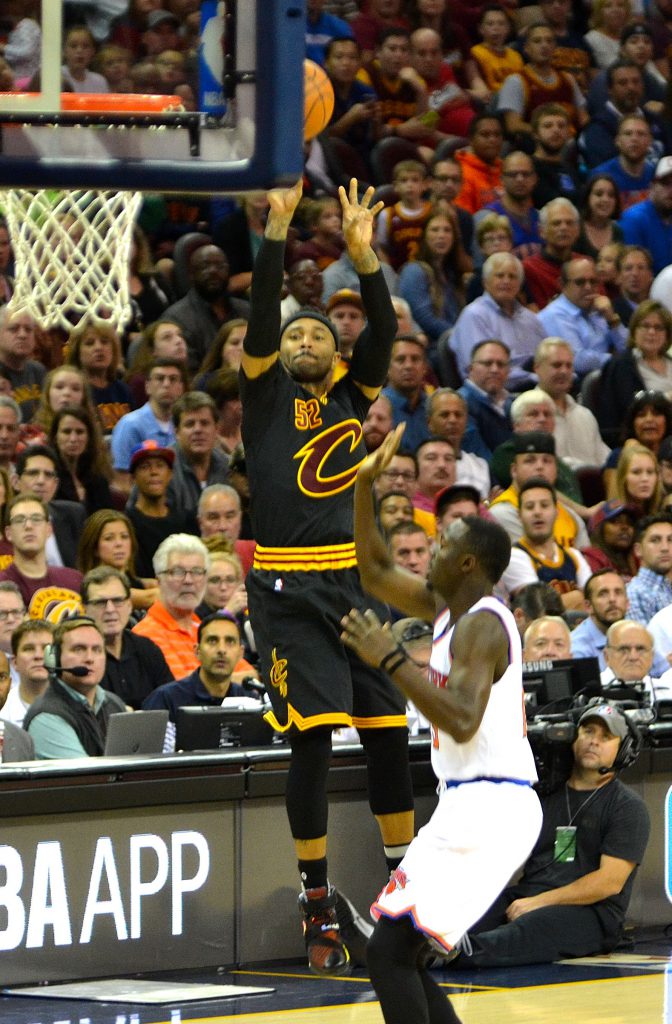 an alley-oop slam thanks to a beautiful lob pass from Matthew Dellavedova, a combination that has been deadly when the Cavs second unit is on the floor.

Thompson and Delly followed it up with yet another alley oop to start out the fourth quarter, causing the Wine and Gold faithful to erupt.

Thompson logged his first double double of the season, with 10 points and 11 rebounds off the bench.

The Knicks regained the lead with a Derrick Williams three-pointer to make it 75-72.

Thanks to a defensive three second violation by New York, Mo Williams hit a free throw to tie the game, and LeBron followed up with two free throws to take the lead.

The following possession LeBron came up with his fourth steal and third breakaway dunk of the night to bring the crowd to its feet. The dunk contributed two of Cleveland’s 24 fast break points in the game. New York had zero fast break points all night.

Midway through the fourth quarter LeBron knocked down a three to make it an eight-point game. LeBron would finish the game with 23 points, 11 of which came in the final quarter.

Kevin Love hit a three to seal the deal with under two minutes remaining, and give the Cavs their largest lead of the night, a 14 point margin. Love posted his third double double in five games, with 11 points and 12 rebounds.

Following the victory, head coach David Blatt told members of the media, “There are games that you just have to grind it out and win with some grit, and I thought we did that tonight.”

The Cavs take on the Philadelphia 76ers Friday night at 7:30 at the Q.