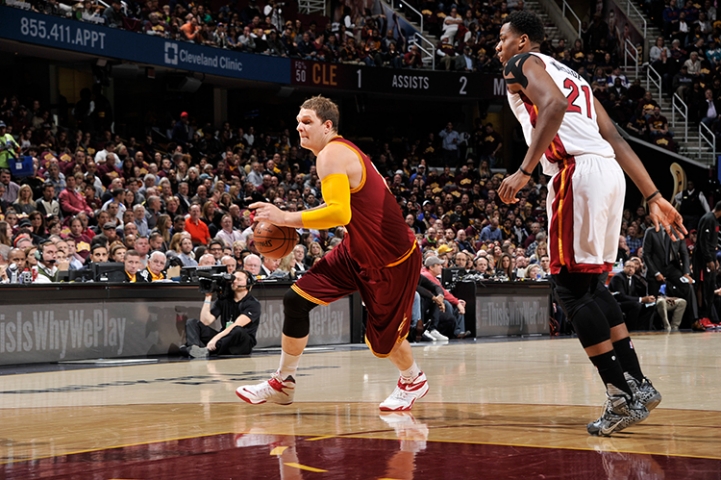 CLEVELAND – The Cavaliers returned to Cleveland for the 2015-2016 season Home Opener at Quicken Loans Arena and defeated the Miami Heat 102-92 Friday night.

The crowd was as enthusiastic as ever from the starting lineup introductions all the way throughout the game.

Veteran point guard Mo Williams addressed the crowd before tip-off telling the fans in attendance, “I’m happy to be back.”

LeBron James got off to a hot start against his former team, scoring ten points in the first quarter.

Kevin Love looked like a different player from last season, fighting for rebounds, powering his way for put-backs, and attacking the rim down low, rather than spending most of his time beyond the three point arc.

Love would finish the night with 14 rebounds.

Tristan Thompson, playing in his first game at the Q since signing his $82 million contract, brought the crowd to their feet slamming home an alley-oop late in the first quarter.

Thompson went on to finish the night with 13 points and 9 rebounds off the bench.

The combination of Love and LeBron scored 19 of Cleveland’s first 29 points to give the Cavs a six-point lead heading into the second quarter.

Cleveland jumped out to an 11-point lead after fan-favorite Matthew Dellavedova drained a three causing the crowd to erupt with just over nine minutes to play in the first half.

It would be his only field goal of the night, but Dellavedova dished out 10 assists coming off the bench.

By halftime, LeBron led all scorers with 18 points, hitting 8 of his first 11 shots.

Miami went on a late second quarter run thanks to Chris Bosh, who scored 12 points in the first half, and Dwayne Wade, who scored 11, and Cleveland entered halftime leading 47-42.

Wade turned it on in the second half, looking like the D-Wade of old, scoring eight points in the third quarter, including a thundering dunk to make it a three-point game with under five minutes to play in the quarter.

The Cavs lived without the three-ball up to that point, shooting just 2 of 17 from beyond the arc for the first two and a half quarters.

Cleveland led Miami 76-67 heading into the fourth quarter, as Love and LeBron each scored 22 up to that point.

Love would finish with 24 points. LeBron scored a game-high 27 points in 33 minutes of action.

“It’s the home opener, the first time since the Finals our fans have seen us in a game that mattered,” James said.

“For them to come out and show their support it’s the least we could do to play as hard as we did and get that win.”

The Cavs held down the fort in the fourth quarter and went on to win the game 102-92, to improve to 2-1 on the season.

Miami could not get going offensively much of the night aside from Wade and Bosh, as Wade scored 25 points and Bosh contributed 16.

“I just felt like in general that we came to this game in a much more relaxed and confident state,” Cavs coach David Blatt said.

The 2-1 Cavs’ next game is Monday at Philadelphia, tip-off at 7 PM.