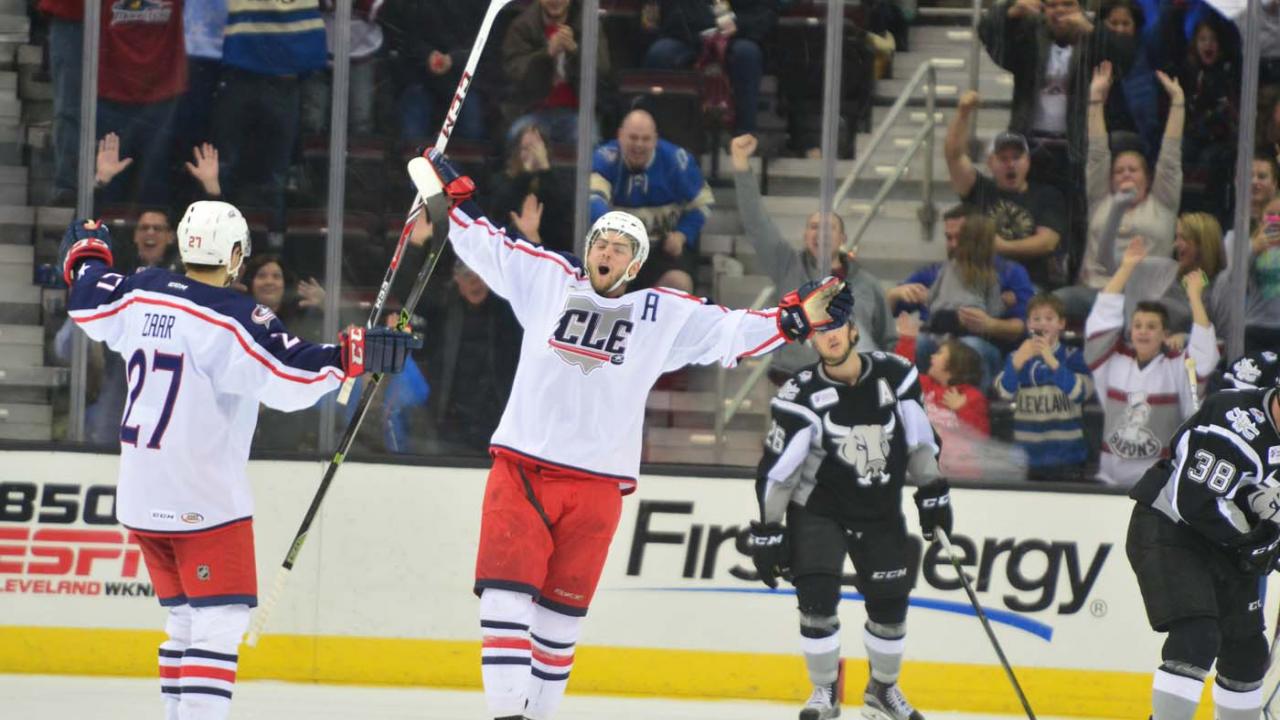 The Lake Erie Monsters returned to Quicken Loans Arena Friday night in front of 12,124 fans after last playing a weekend series in Texas against the Stars.

The Monsters welcomed the San Antonio Rampage to town to kick off a back-to-back two-game series. It was the first meeting between the two teams, since the Colorado Avalanche affiliate, formerly the Monsters of 2014-2015 relocated to San Antonio. There were plenty of familiar faces on the ice.

Lake Erie trailed by two late in the second period, but rallied back, thanks to some timely offense and a substitution at goaltender, which shutdown the Rampage for the final period and OT. The Monsters would win 4-3, thanks to two goals from Michael Chaput, including the game-winner in OT.

It was not a friendly contest from the start, as there were two fights in the first two minutes and ten seconds of action.

Brett Gallant and Oleg Yevenko of the Monsters both got into boxing matches with members of the Rampage.

The action-packed start to the game would continue, as Daniel Zaar notched his team-leading 13th goal of the season at the 4:28 mark of the first period. Michael Paliotta and Steve Eminger assisted on the score.

The Rampage answered right back 30 seconds later, as Andrew Agozzino tied it up at one with a power-play goal for San Antonio. Mikko Rantanen and Borna Rendulic assisted on Agozzino’s 10th goal of the season.

Reid Petryk scored his 12th goal of the season to put the Rampage on top with 4:27 left in the first period and the Monsters would trail 2-1 at the first intermission. Agozzino and Joey Hishon assisted on the go-ahead power-play goal.

It was a scoreless frame for the first 17 minutes of the second period before the Rampage added onto their lead to make it 3-1, as Michael Schumacher scored his eighth goal of the season, assisted by Nate Guenin and Sam Henley.

The Monsters would take advantage of a power-play with 19 seconds left to make it a 3-2 game heading into the third period. Oliver Bjorkstrand scored his tenth goal of the season with a beautiful slap-shot, fed by T.J. Tynan. It was Tynan’s team-leading 26th assist of the season.

The AHL All-Star Tynan has been one of the most unselfish players on the team with just four goals on the season.

The Monsters fought back in the third period, tying it up at three 8:34 into the final frame, as Chaput netted home his 11th goal of the season, assisted by Zaar and Dillon Heatherington.

The Monsters had several great chances to take the lead in the final 11 minutes of regulation, but could not capitalize, as the Rampage defense and goaltender Roman Will locked down and forced the game to overtime tied at three.

The Monsters went on a power-play two minutes into the overtime, giving them a 4-on-3 advantage, but San Antonio’s defense held firm again with a clutch penalty-kill.

Chaput came through with 57 seconds left in OT, getting a rebound to go, giving the Monsters the 4-3 win.

Heatherington and Zaar assisted again on the game-winner, as Zaar contributed three points on the night, Heatherington dished out two assists, and of course Chaput’s two goals, which tied and ended the game, were the story of the night.

Chaput leads the team with 32 points this season.

Thiessen’s 27 minutes of shutout netminding were just as important, as the whole team seemed to be re-energized from the moment he came into the game.

Lake Erie improves to 27-17-5-3 on the season with the win and will rematch the Rampage at the Q on Saturday night at 7 PM.