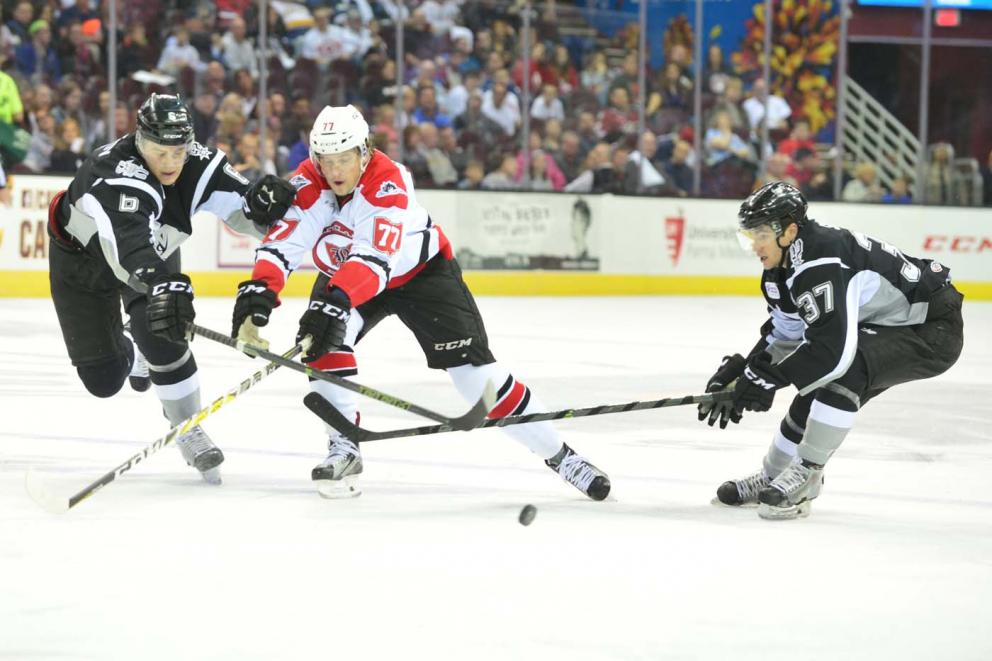 The Lake Erie Monsters played the second game of a back-to-back home series with the San Antonio Rampage on Saturday night at Quicken Loans Arena in front of more than 13,000 fans, the largest crowd of the season.

It was scoreless for 58 minutes. The Monsters took a 2-0 lead with just over a minute to play, but San Antonio rallied back to score two goals in the final minute and send the game to overtime.

After a scoreless overtime, a three-round shootout went to “extra innings,” lasting seven rounds, but the Monsters would fall 3-2.

The first period was somewhat different from Friday’s game, in which seven goals were scored in 64 minutes of hockey, as the opening frame Saturday night was scoreless.

Brad Thiessen got the start in the net for the Monsters and Reto Berra made his first start of the season for San Antonio after being reassigned from the Colorado Avalanche.

The Monsters had plenty of good looks in the second period, but Berra was rock-solid, not allowing a goal.

The good news for Lake Erie was that Thiessen was just as great on the opposite end and it would remain scoreless after two periods.

Both goaltenders entered the final period with 22 saves.

After a relatively quiet first 11 minutes to the third period, a couple of skirmishes broke out between several players, but no one was penalized.

The intensity picked up from there for the final eight minutes of the period.

18:15 into the third period, Oliver Bjorkstrand finally broke the scoreless tie with a slap-shot. It was the second night in a row Bjorkstrand came through with a goal, his 11th of the season.

24 seconds later, John Ramage added a tally with an open net goal to make it 2-0, which one would think would put the game away. It was Ramage’s fifth goal of the season.

However, Mikko Rantonen had something to say about that, making it 2-1 with one minute left. It was the rookie-sensation Rantonen’s 18th goal of the season. He was assisted by Max Noreau and Nikita Zadorov.

Less than 40 seconds later, Noreau scored his 10th goal of the season, assisted by Zadorov and Andrew Agozzino to tie it up with 22 seconds to play, sending it to overtime for the second-straight night.

The four-goal barrage in the final two minutes would temporarily come to an end, as the five minute overtime was scoreless and the Monsters and Rampage would head to a three-round shootout.

San Antonio converted on the first-round attempt, but Sonny Milano came through to tie the shootout at one.

Thiessen made a clutch save in round two, but Berra answered back and it headed into the third-round tied at one.

Thiessen made another clutch save in round-three, but Michael Chaput couldn’t get it to go on the other end, forcing a fourth-round.

Neither side could score in round four.

Thiessen made his fourth straight save in the shootout in round five. Daniel Zaar was shut down by Berra, sending it to round six.

Zadorov lost his balance skating into the net losing control of the puck, giving Markus Hannikainen a chance to end it.

Berra locked the Monsters down again.

Round seven started with Noreau, who finally broke through to make it 2-1 in the shootout. The game was on the line with Trent Vogelhuber hoping to keep the Monsters alive, but Berra saved his sixth-straight round of the shootout and the Monsters would fall 3-2.

The Monsters fall to 27-17-5-4 on the season, and are back at it again on Thursday night against the Rochester Americans at Quicken Loans Arena. Face-off is set for 7 PM.