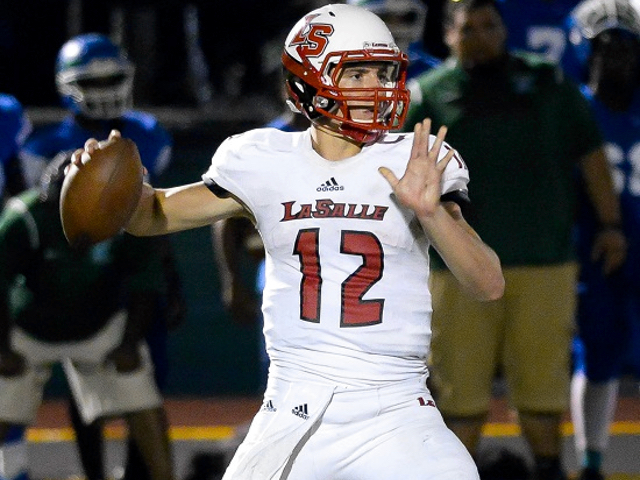 AKRON, OHIO– On Friday, the La Salle Lancers (5-2) traveled three and a half hours to take on the St. Vincent-St. Mary Fighting Irish (5-2).

Both schools were coming off of tough losses, with the Lancers losing 42-7 to the 6-0 St. Xavier Bombers (the highest-ranked high school football team in Ohio) and the Irish losing 35-14 to the Barberton Magics in Week 7.

The game they played on the Irish’s home field was a rather sloppy affair full of penalties as the two teams combined for 25 penalties that took away a combined 235 yards.

This was also a game that started and ended with the Irish struggling to gain steam on offense while the Lancers were able to make it down the field consistently. This wouldn’t be seen in the difference in third down conversions as the Lancers were 2-for-13 (15.4 percent) on third down and the Irish were 8-of-21 (38.1 percent). It wasn’t seen in the difference in the number of first downs the teams mustered, with the Irish earning 21 first downs and the Lancers getting eight.

It was seen in these numbers:

Despite the Irish running nearly twice as many plays as the Lancers (77 compared to 40) they were only able to generate 63 more yards of offense (SVSM averaged 3.6 yards per play compared to 5.5 yards per play for La Salle). These numbers illustrate how ineffective the Irish were in moving the ball.

In the first half, SVSM quarterback Luke Lindsay connected with wide receiver Scott Walter time and time again. Walter had 80 combined receiving yards on just two passes from Lindsay early in the first quarter. After a completed pass, penalty against La Salle and a run from running back Terrance Keyes got SVSM inside of the redzone for the first time, kicker Luke Dobson missed a field goal to give the Irish the early lead.

After the Irish turned the ball over on downs, La Salle received the ball and quarterback Griffin Merritt earned a penalty for passing the ball to nobody in particular on first down. Right after that play, Merritt threw an 82-yard touchdown strike to wide receiver Zachary Branam. The Irish struggled to contain the big plays against Barberton last week and it wound up being their own undoing. As a result, that touchdown pass by Merritt was certainly a sight for sore eyes.

In a lot of ways, the game started off a lot like it did against Barberton. The only difference is that Keyes was SVSM’s workhorse that night. In this game, it would be Lindsay, who had 44 pass attempts against the Lancers.

On the next few Irish drives, Lindsay consistently missed open receivers and threw to a spot on the field rather than to his receivers.

A 14-yard punt would give the Lancers great field position early in the second quarter. Soon, a 37-yard field goal by La Salle would bring the score to 10-0 with more than seven minutes left before the half. Penalties, which were a problem throughout the game, reared their ugly head on what should have been a short touchdown run from Keyes after Lindsay connected with receiver Zachary Collins.

Collins would skirt to the five-yard line before an illegal shift brought the Keyes touchdown back to the 10-yard line. The next play saw Keyes lose three yards on the drive.

The Irish wouldn’t score before the half.

Down 10-0 at the half, the Irish came out and went to firing, relying on the arm of Lindsay. Early in the third quarter, the Lancers were pushed all the way back to their own end zone before tailback Cameron Porter was caught behind-the-line of scrimmage for a safety. Those two points would be the Irish’s first of the game but it was enough to provide real energy to the crowd. The Irish were only down by single-digits with more than a quarter and a half left to play after all.

However, the game turned after this sequence by SVSM’s quarterback:

Lindsay completed a pass to Walter and then wide receiver Jalen Ross for a combined 21 yards before a screen pass intended for tailback Garrett Bischof was intercepted by La Salle cornerback Shane McNally and returned for a touchdown. Lindsay would improve as the game went on and hit multiple receivers but it seemed as if he had hardly had any time in the pocket most of the time. He would end up scrambling all night long after being flushed out of the pocket although there were times when he seemed determined to run before he completely surveyed the field. There may have been a couple of quarterback keepers but there was certainly a lot of improvisation on the part of Lindsay.

In the final period, with the Irish down 17-2 and pressing, they were aided by La Salle’s lack of discipline. After 42 yards of passing by Lindsay got the Irish to the 29-yard line, the Lancers earned two personal foul penalties that brought SVSM deep inside the red zone. Already having used his legs to produce plays most of the night, Lindsay got the Irish’s first touchdown on a nifty seven-yard run that brought the score to 17-9 with 2:23 left in the fourth quarter.

Unfortunately, a missed call by the referees resulted in La Salle receiving the ball after the Irish attempted an onside kick. Although their kick didn’t go 10 yards, a member of La Salle’s team touched it and then the Irish recovered the kick. While SVSM should have gotten possession of the ball with a chance to score in a two-minute drill, the Lancers were able to run 39 more seconds off the clock. The Irish would follow up a first down with a sack, an early snap and an incomplete pass.

The last play of the game was no hook-and-ladder special. Just a failed Hail Mary attempt as Lindsay again scrambled out the pocket trying to buy time for a pass.