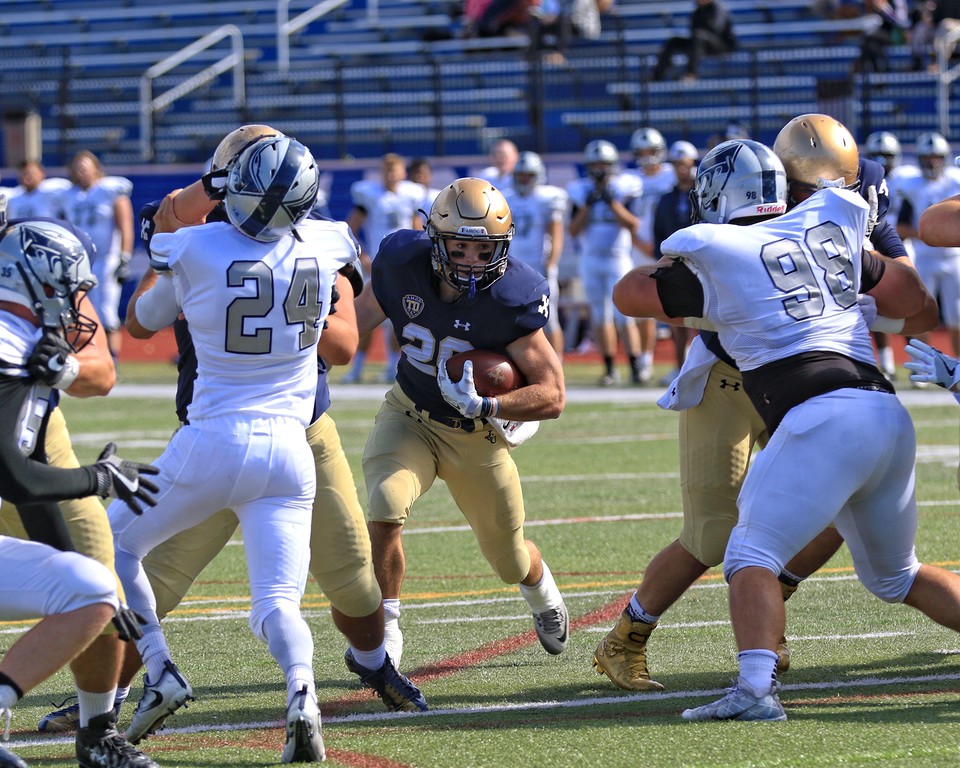 The John Carroll University football team exceeded the .500 mark for the first time this season after a 48-21 victory over Marietta College, extending its winning streak to 28 games in the all-time matchup between the two programs.

Brian Kornowski joined the scoring barrage in an unprecedented fashion, logging a career-high 130 yards through the air and his first touchdown catch since 2015.

With Mount Union beating Heidelberg, the Blue Streaks moved into a second-place tie atop the OAC ladder at the culmination of the day’s festivities.

One week removed from seven touchdowns and 351 yards on the ground, the JCU backfield continued to dismantle its opposition.

After notching 14 scores in 2016 – tied for fifth in single-season touchdowns in program history – Kukura crossed the goal line on three occasions, propelling his team to a 31-7 advantage in the third quarter.

Sandwiched between the rushing spectacles was a 30-yard, over-the-shoulder touchdown grab by Eddie Williamson, his third of the campaign.

Anthony Moeglin capped off the one-sided affair with a 33-yard strike to Kornowski and six-yard connection with tight end Danny Disbrow, finishing with a 68% (17-for-25) completion rate for 257 yards, three touchdowns and a 186.0 quarterback rating.

Blue and Gold struggles on screens

Despite the large deficit, the Pioneers found a void in Kyle Hoke’s defensive front, tallying a trio of touchdowns on screen passes to running backs Roger Walker and Tanner Clark.

Jimmy Thomas chipped in 2.5 sacks for eight yards behind the line of scrimmage.

The Blue Streaks play host to the Ohio Northern University Polar Bears next Saturday at 1:30 p.m. from Don Shula Stadium.

Takeaways from BGSU’s loss to Akron, the season so far
Buckeyes Send Terrapins Packing in 62-14 Route Over Maryland