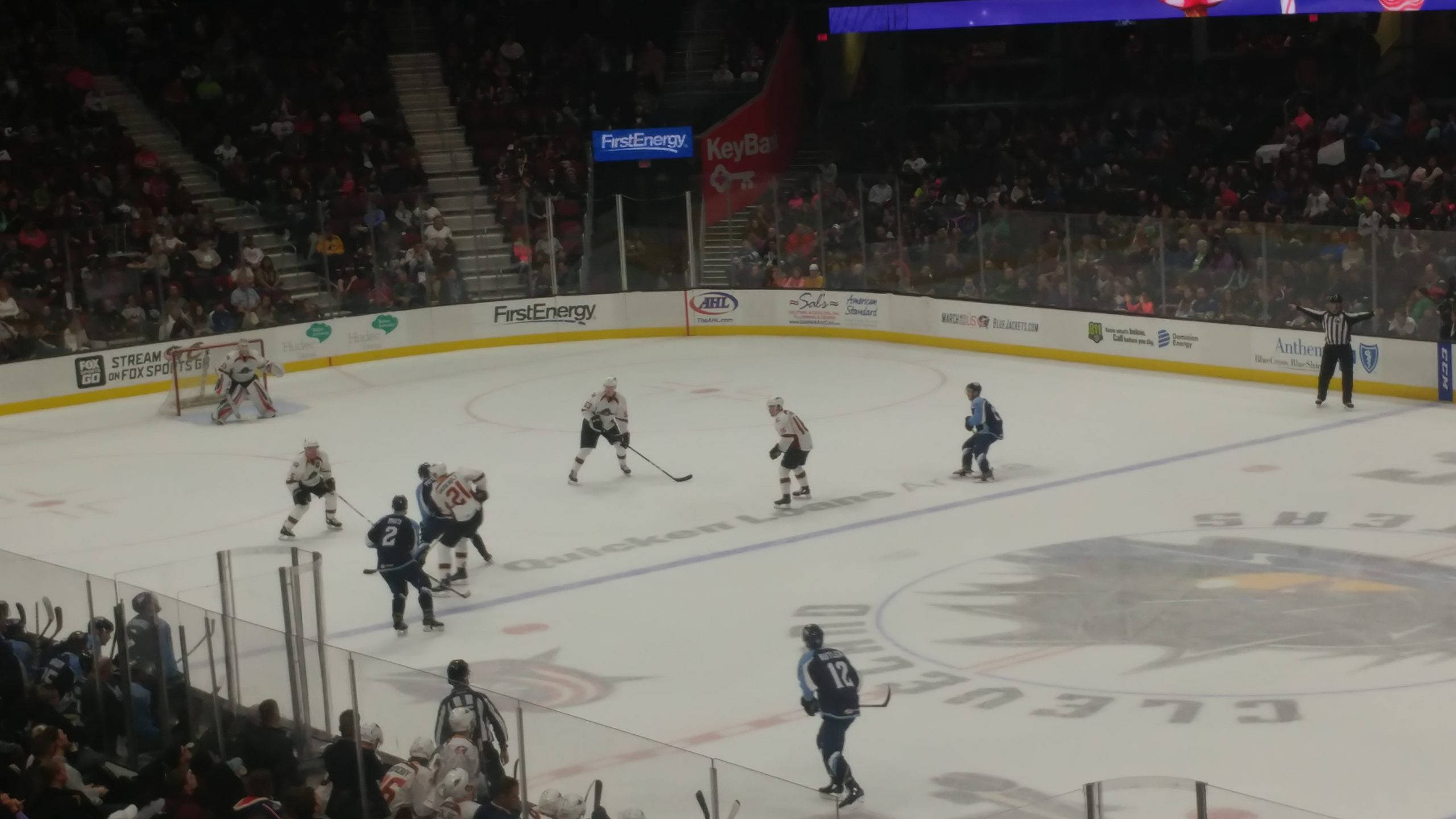 CLEVELAND, Ohio- The Cleveland Monsters won tonight’s contest against the Milwaukee Admirals without one of their best defensemen. That’s right, Cleveland was able to secure a 1-0 victory while playing without Cameron Gaunce.

Gaunce, who exited the game just two minutes and forty-two seconds into the game for boarding and a game misconduct, has been a back-line staple for Cleveland. He provides a lot of knowledge and is a steady player to place on the defense. His exit created an opportunity for younger guys like Doyle Somerby and Sam Vigneault to step up. They certainly did so.

The other storyline was in between the pipes, as Joonas Korpisalo played in his first game action since November 7th against the Nashville Predators. Korpisalo, along with Sonny Milano, Gabriel Carllson, and Zac Dalpe, was assigned to Cleveland from the Blue Jackets yesterday. The first three players mentioned were officially sent to Cleveland late last night. Less than twenty-four hours later, Korpisalo was in goal defending the Monsters’ net.

The first period was an extremely chippy one, both squads pushing and shoving any chance they got to assert their dominance. The tension on the ice was quite visible following Gaunce’s check behind the cage of Joonas Korpisalo that left Yakov Trenin on the ice for several minutes. Trenin collected his bearings and was assisted off of the ice, but the Admirals made it apparent that the game would turn up a notch in the physicality department. The first period would end scoreless but the tone was clearly set.

Cleveland would claim a 1-0 lead within the first five minutes of the middle stanza by way of some nifty passing. Doyle Somerby played the puck off the end board to Sam Vigneault, who quickly dumped a no-look pass to Miles Koules. Koules potted his third goal of the campaign at the 4:21 mark on what could be an early candidate for goal of the year.

The #CLEMonsters show off some nifty passing and Miles Koules pots the puck at the 4:21 mark to give Cleveland a 1-0 lead over Milwaukee. pic.twitter.com/yAwhKfcVPP

Koules has been one of the more improved Monsters this season so far and his third goal of the season came at a nice time. Cleveland skated into the second intermission leading 1-0.

Cleveland would continue their efficient pace and have a lot of looks in the Milwaukee defensive zone. The Monsters would continue to pepper Saros until they finally would crack the code again. Paul Bittner would send the puck home off of a slapshot, courtesy of a Dean Kukan pass. Bittner’s third goal of the season put Cleveland in a comfortable position and they showed it throughout the final half of the frame. Though they’d only finish with 21 shots on goal, the stat sheet won’t show the pressure put on Saros for sixty minutes.

The Admirals would break up Korpisalo’s shutout with 27.8 seconds left off of an Emil Pettersson marker that bounced awkwardly off of the top crossbar and behind the Cleveland netminder for the goal. Joe Pendenza would fire home an empty-netter to put the game out of reach for good, as the Monsters took the second straight victory from Milwaukee.

Cleveland would claim the 3-1 victory and improve to 7-4-2-1, winners of three straight.

Monsters Head Coach John Madden was rather pleased with his team’s effort for most of the night, though he is still looking for a complete performance from his team.

“Good weekend. I still want us to get back to a sixty-minute game. What I did like though is how we held it together in the first period,” stated Madden following the game. “We had some calls go against us, we bent a little bit. Korpi came up with some big saves on the five-minute power play but the guys stuck together and saw it through to the end.”

Korpisalo was excited for the opportunity to play on the ice in a game setting again. “I was really happy about this because I hadn’t played for awhile,” said Korpisalo. “I got here today and I think I was ready to play today. That was a fun game to play as well. The boys battled hard and I had a couple shots in the beginning. That was a good game.”

“I just gotta put in my best work every day. That way I’m always ready to get into games.”

The Monsters hit the road for another meeting with Milwaukee before heading home to play the Texas Stars.