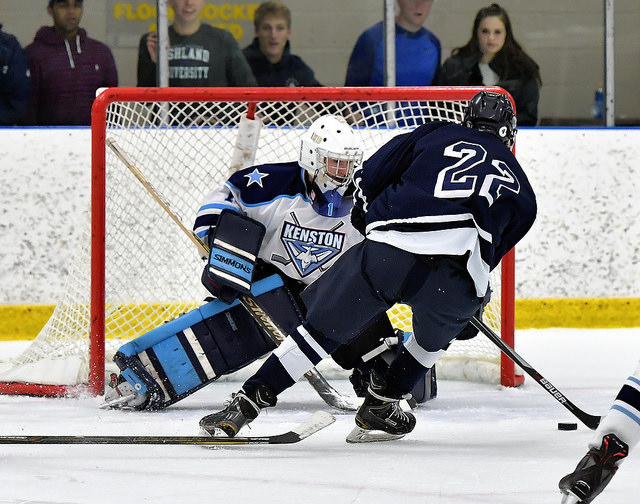 In a nip and tuck affair at The Pond on Friday night, it was just one goal that decided it, as the Kenston Blue Bombers topped the Hudson Explorers 1-0 in a hard fought GCHSHL Red League matchup.

With the win Kenston stays unbeaten in league play, as they top the Red Central Division with a mark of 5-0-0.

The Explorers drop to 1-3-0, fourth place in the Northeast Division of the Red League.

The first period ended with the game knotted up 0-0, as both teams tried to get chances in each other’s end but were unsuccessful.

The lone goal of the game came with 11:35 left in the second period, as Bombers forward Val Carriero found the back of the net, an unassisted goal to make it 1-0 Kenston.

Carriero has now 15 goals on the season for Kenston to go along with 10 assists in just five games. He scored four times in a win against Solon back on December 8th.

The goal would stand up, as Jason Hildebran stopped all 22 shots he faced from Hudson, helped out by a solid defensive effort from his teammates.

Kenston will not play another league game until January 5th at 6:30pm as they play at OBM Arena / Iceland against the Strongsville Mustangs.

Hudson will be back on the ice on Saturday at 2:10pm as they play in Kent against the North Olmsted Eagles, who come in at 1-4-1.