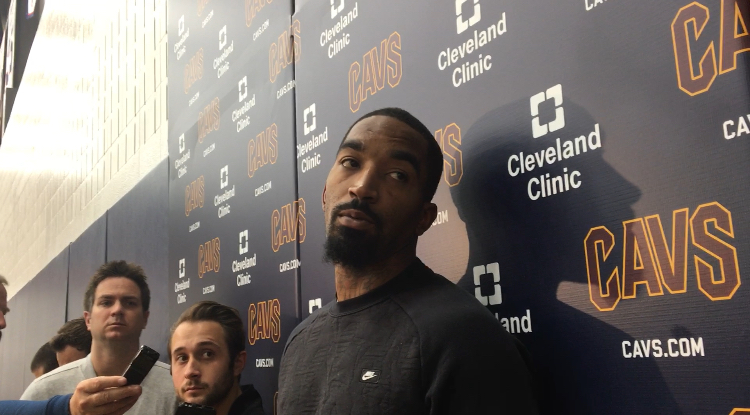 INDEPENDENCE, OHIO– Ever since LeBron James sprained his left ankle during the first week of Cavaliers’ training camp, he has been hindered throughout the preseason.

Last week, James made his lone appearance in a preseason game for the Cavs when the team took on the Chicago Bulls. During the game, however, James re-aggravated the ankle going to the basket on a spin move. He did not appear in the Cavs’ final preseason game against the Orlando Magic on Friday.

Ever since then, his status in the season opener on Tuesday against the Boston Celtics has been unknown. According to head coach Tyronn Lue, James’ status is still uncertain.

“I’m preparing that he is [playing].”

J.R. Smith, however, had a much more emphatic answer when asked about the status of James.

Smith said he was so sure that James will play given his passion for the game.

“Just because he loves the game,” Smith said. “It’s different obviously, preseason and regular season. We were talking about it, he’s never missed a– since he was eight years old and started playing he never missed the first game. So, I’m prepared for him to play.”

JR Smith on why he thinks LeBron James will play tomorrow pic.twitter.com/QwXNMU5FRm

If James is unable to play, Smith (who was recently delegated to the second unit in favor of Dwyane Wade in the starting five) will take his place in the first unit, Lue confirmed on Monday.

Keselowski wins chaos-filled Talladega race, advances to Round of 8
J.R. Smith says Celtics aren’t a threat to the Cavaliers