Is Justin Gilbert’s Time Up In Cleveland? 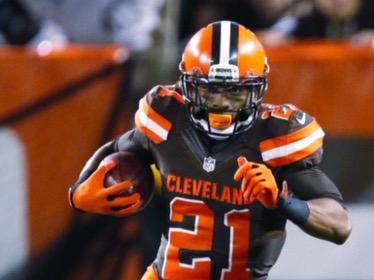 As the last two preseason games have shown us anything, it’s that the Cleveland Browns’ defense has not improved much since last season. Missed tackles and miscommunication have been a theme for the team that’s put them in a 0-2 start but it is preseason and this time is used to see what your team can do and see if you have the right players in the right situations.

This brings me to the Browns 2014 eighth overall draft pick DB Justin Gilbert.

Gilbert was drafted by Mike Pettine because to run his defensive scheme, he needed two solid corners. With DB Joe Haden on one side, they thought that Gilbert would come in and hold down the number two receiver at bay as Haden would lock down the other side of the field. This was not the case as Gilbert was not a strong tackler and would get lost in coverage from looking at the quarterback until the ball was thrown, leaving a man open to catch the throw.

Gilbert has put up unimpressive numbers since his rookie year. In two years, he’s played in only 19 games which he started only started in three games, 35 tackles, nine passes defended, one interception that he ran back for a touchdown against Andrew Luck and no forced fumbles. Those are not the numbers of a eighth overall pick. Those are practice squad numbers.

Gilbert wasn’t even living up to expectations off the football field. He was a healthy scratch in four of the last five games of the 2016 season because he was showing up late for practices. He was also involved in a road rage incident when he cut off a driver on the highway and threw a drink at the car. The two drivers got off the highway in Brunswick, OH and drove into a ditch trying to get away from the enraged driver.

This seems like Gilbert’s last chance to redeem himself. Head coach Hue Jackson will be paying close attention to the third year back and even gave him the start last week in the Atlanta game where he had two tackles and one pass defended. He was beat multiple times and missed tackles when the Browns needed them. With Haden possibly returning to action this Friday against Tampa Bay, Gilbert will have only about a game and a half to show that he can elevate his play and be a solid contributor to this team.

My guess is that not only will Gilbert not be on this team next year, but I doubt to see him in an NFL uniform again after this season.