Is It Do Or Die Time For Weidman Saturday Night? 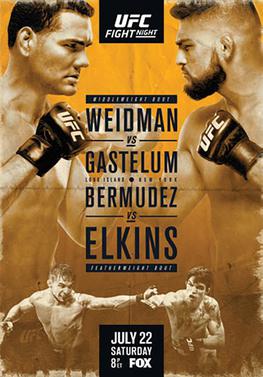 Chris Weidman is the perfect Middleweight. He is too big to be a welterweight and too small to be a light heavyweight.  This is a division made for guys with his built and skill set.  He was undefeated for many years and was the first to topple the Legendary Anderson Silva in UFC competition.  Not only once, but he took the legs off the Spider twice.  So, the question remains, why can’t he seem to win anymore?

The former UFC Middleweight champion of the world is riding the burn of a three fight losing streak, all by knockout! Now, to his credit, he was ahead on points in both of his last two fights when the freak knockouts happened.  For instance, he was on his way to outpointing Yoel Romero before catching a nasty flying knee in the third round to bust him wide open at UFC 205.

He was wining on several scorecards both by the judges, the media members and the fans when a bizarre series of events led to a chaotic defeat at the hands of Gegard Mousasi at UFC 210 in April from Buffalo. The ref incorrectly stopped it to penalize Mousasi for a knee, he later deemed legal and then called the fight and never let Weidman continue. Talk about bad luck?

So, here we go again, this time Weidman will be lining up against the dangerous Kelvin Gastelum in the main event of UFC Fight Night at the Nassau Veterans Memorial Coliseum in Uniondale, New York. Gastelum is one of the best fighters in the division but has had his share of a rocky road staying out of trouble.

He has missed weight several times throughout his career, and his most recent win, a dominating victory over Vitor Belfort was turned into a NC afterward when he was busted for smoking pot.

How can you take a guy like that serious? Easily, he is really good!  With knockouts over Tim Kennedy and Nate Marquardt, and the forementioned one of Vitor Belfort that was eventually thrown out, he has proven his has dynamite in his hands.

This is a must win for Chris Weidman as a fourth straight loss may be impossible to come back from. While a win, with Mousasi recently leaving for Bellator, puts Weidman right back in the title picture.  He has stayed true to his camp and same trainers though all of this.  Not leaving them for more established camps or training teams.  He has proven he is loyal, however, with a loss Saturday major changes may be on the way.

I see Weidman ending the streak, and coming out on top.  Prediction – Weidman by split decision.

Other fights on the main card will include

Elkins is #11 in the official UFC Featherweight rankings and about to make his 7th appearance in the UFC.  Yet, one could argue he has zero signature wins.  He has a ton of wins, just none of major note.  Dennis Bermudez on the other hand is one of the best Featherweights on the planet and will continue to show why he is this weekend.  He is 9-4 in the UFC but coming off of a vicious first round knockout to Chan Sung Jung back in February.  I have no doubt he will rebound with a win here.

Prediction – Don’t bet against the Stache, going with Cummins all the way on this one.  Cummins will never be a top flight contender in the UFC, but he can make a steadfast career with them as a journeyman.  Those journeymen victories include wins over guys like Gian Villante.

Thomas Almeida is a knockout machine.  The path for him to victory has been simple, swing, connect and win!  He is 22-1 with his only loss coming to current UFC Bantamweight Champion Cody Garbrandt.  Of those 22 wins, 17 have come from devastating knockouts.  Hard to argue against him.

His opponent, Jimmie Rivera is one of the best Bantamweights in the world, and gets very little attention as he just keeps winning.  He is 20-1 and on a incredible 19 fight winning streak!  His latest and best win came back in September, in Cleveland over Uriah Faber at UFC 203.  It was a fight he won easily by decision.

While Almeida knocks people out, Rivera wears them down and out points them.  Almeida will be swinging for the fences early, but if Rivera can weather that storm he should be able to control the fight.

Prediction – Rivera sticks to the game plan and walks out of the cage victorious.

Koby Altman To Be Named Cavs General Manager
Boxing Hall Of Famer Bryan Gedeon Is Teaching Life Lessons In And Out Of The Ring!