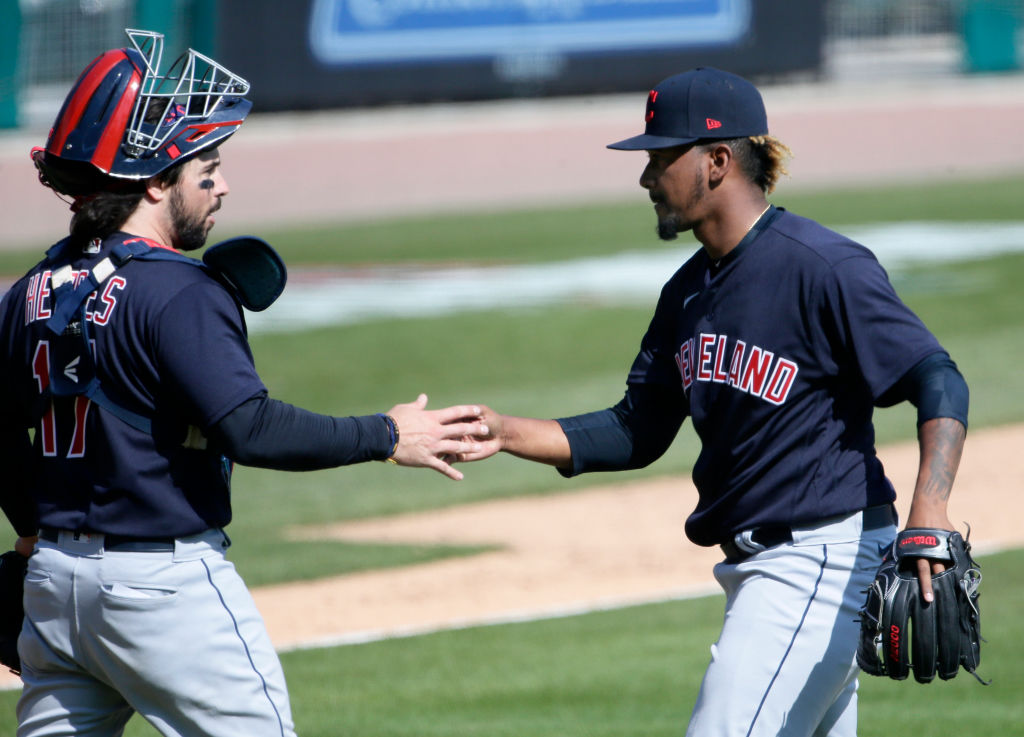 Losing two of three to the Tigers to start 2021 wasn’t on the menu for the Indians.

Losing all three and getting swept would have been a whole lot worse.

Sunday the Indians stopped the early struggles of 2021, as they overcame an early 3-1 deficit to top the Tigers in Comerica Park 9-3.

The victory was helped out by three key homers, the biggest of which was a Jordan Luplow two-run blast in the 6th which put the Tribe up for good.

Aaron Civale got the start for the Indians, and while he was shaky early allowing three runs in three innings, he settled in and had a solid seven innings, striking out six, giving up two hits.

Here’s a couple takeaways from the team’s first victory of the season as the club gets set for the home opener against the Kansas City Royals Monday at 4pm.

Some Much Needed Power at the Plate

Three homers later the Indians were walking out of Comerica Park with a win after Jordan Luplow, Franmil Reyes and Austin Hedges all went deep for the club to lift the offense.

The big hit of the day was a two-run homer by Luplow, which gave the Tribe their first lead of the day at 6-3 in the 7th.

DH Franmil Reyes put any doubt about the game away, as he homered in the 8th with one on to extend the lead.

In the 9th it was time for backup catcher Austin Hedges, who showed off his power with a solo shot making it a 9-3 final.

The Indians offense is going to have days like Thursday and Saturday, but then there will be days like Sunday, when homers help this team get a win.

Pen Powers Past the Tigers

The Indians lifted Aaron Civale after seven good innings, and gave shots to two big pieces in the pen that are being counted on in 2021.

The first was Cal Quantrill, who needed just 12 pitches to strikeout two Tigers, and get out of the 8th inning. In those 12 pitches

After Civale left the game after seven innings, Indians fans got a chance to see two players who very much will be counted upon as big parts of the bullpen in 2021.

First it was Cal Quantrill, who needed just 12 pitches (8 strikes) to strikeout two Tigers, and get out of the 8th inning.

It wouldn’t be a shock at all to see Quantrill at some point in 2021 get a spot start due to injury or for some other reason.

Since there was no save chance on this day, the 9th belonged to fireballer Emmanuel Clase, who Indians fans have been anxious to see since he was suspended for all of the shortened 2020 season.

Clase needed 16 pitches, 10 of which were strikes, to record a strikeout and get out of the Detroit 9th throwing some serious heat over 100 miles per hour.

It was a good outing for the pen as in two quick innings the Quantrill and Clase combo needed 28 pitches to dominate the Tigers.

It looked early on like it might be a long day for the pen, as Aaron Civale gave up three runs in the first three innings, allowing

Civale gave up a solo homer to rookie Akil Baddoo, who in the first MLB pitch he ever saw clubbed a solo homer making it 3-1.

After that it was Civale in command, as he lasted seven innings, giving up the three runs on just two hits with three walks and six strikeouts.

He ended up throwing 91 pitches, 57 of which were strikes.

The team really needs the combo of Civale and Zach Plesac to step up with a bit of an unknown in the fourth and fifth spots.

Civale stepped up and threw well Sunday, a very good outing in his first 2021 start.