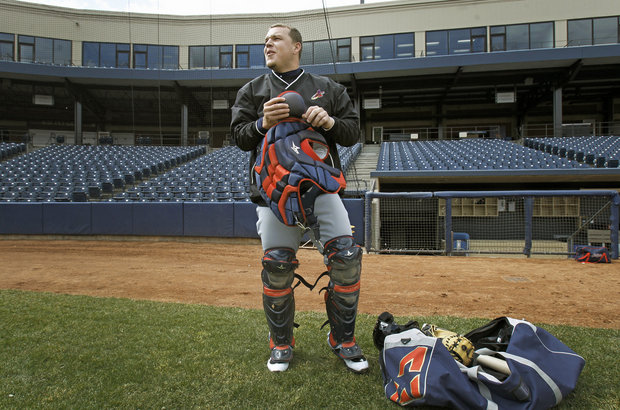 Roberto Perez wrapped up what by in large was a successful first season as the Indians full-time catcher, not only setting career highs at the plate, but also winning a pair of awards for his defense.

On Thursday Perez spoke to MLB Network about winning the awards as well as the season that he had playing with bone spurs.

“It means a lot, it means I have a lot of pride being back there,” Perez said.

“To play defense behind an outstanding rotation that we have, it takes a lot of work and dedication, I put a lot of work in the cages before the games.

“I have to give a lot of credit to Sandy Alomar,” Perez said. “He’s helped me a lot throughout my career, I’m just proud of myself.”

Perez ended the season hitting .239 (93-for-386) with career highs in homers (24) and RBI (63). Many overlooked his defense, but in the end it was a huge part of his game and part of the reason why the Indians decided to trade Yan Gomes last November.

Add on to that the fact he was playing a majority of the season with bone spurs, and Perez’s season was not only a transition playing everyday, but also doing it in pain.

“I told everybody I felt like I had a knife in my ankle, I was just trying to get to the ballpark earlier, we have a great training staff, they did anything they could to keep me on the field,” Perez said.

“It was tough, especially for a catcher who has to be squatting down, but I was just trying to deal with it.

“For me I waited so long to play everyday, five or six years, I didn’t want to take it for granted.”