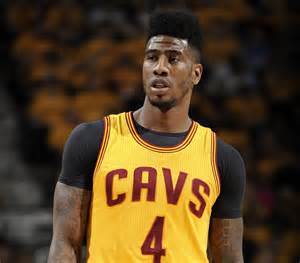 Cavaliers guard Iman Shumpert is listed as day-to-day with a shoulder sprain he suffered in Thursday night’s win over Chicago.

The Cavs have been enduring injuries seemingly since the dawn of time, or at least since LeBron James returned in 2014.

Shumpert’s injury comes right after Kevin Love exited a game with shoulder discomfort a little over a week ago, and also happened just hours after the trade deadline passed, in which Shumpert’s name was brought up as a potential trade candidate.

Love returned on Thursday along with backup point guard Matthew Dellavedova, so it was only a matter of time before someone went down. In this case, a matter of less than one game.

His injury-history may have had something to do with the Cavs considering trading him.

It is unknown if Shumpert will be available to play in the Sunday matchup in Oklahoma City against the Thunder, but given the tendency of the Cavs to “play it safe” with injured players, it would be prudent to expect him to rest.

Shumpert missed the entire month of November with a wrist-injury he suffered in September, but his injury history goes back long before that. In his first two seasons in the NBA, (2011-2013,) Shumpert missed 60 games, roughly 35 percent of those two seasons.

It’s worth noting that this shoulder is the same one that caused Shumpert to miss five weeks in the 2014-2015 season.

He is the team’s best one-on-one defender so obviously his presence will be missed. Hopefully, it’s nothing serious and Shumpert is back to 100 percent soon.

Could Joe Johnson be Cavs’ Next Target?
Anderson Varejao Writes “Thank You” Letter to Cavs Fans