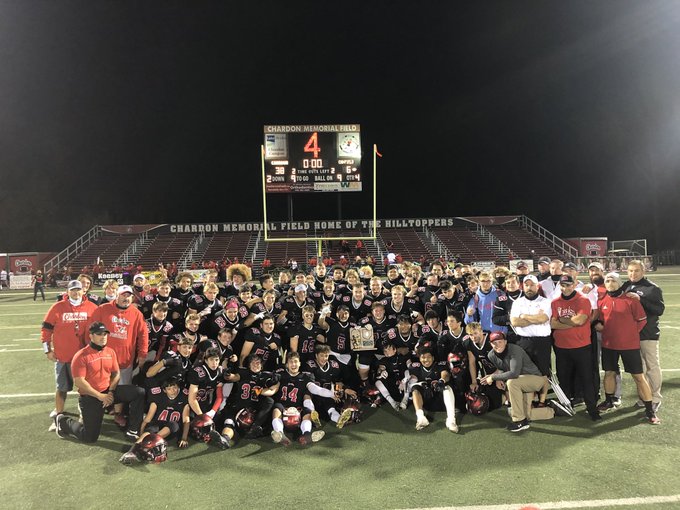 CHARDON, OHIO – It wasn’t long into Friday night’s Division III Region 9 semifinal matchup before it became apparent that the Hilltoppers were prepared to take on Canfield.

The Chardon offense set the tone from the get-go when on the first play from scrimmage, Quarterback Drew Fetchik found Nathaniel Sulka on a swing pass to the left side and Sulka took it 52 yards deep into Cardinal territory. James Pettyjohn would find the end zone just three plays later and the Hilltoppers had a quick 7-0 lead with just one minute and twenty-two seconds off the clock.

Chardon’s defense got in on the action not long after when Senior Linebacker Vince Ferrante stepped in front of a pass from Canfield Quarterback Broc Lowry on 3rd and 13 setting up the offense in the red zone.

The Hilltoppers wouldn’t take long to capitalize with Evan Ash finding paydirt from one yard out and just three minutes into the contest Chardon led 14-0.

Canfield would take over on their own 16 after the kickoff. The Cardinals seemed to be on the rebound, crossing mid-field on a drive that saw them convert on a 3rd and 2 and a 4th and 1 against a very stout Chardon defense.

The Hilltoppers eventually found a way to get enough pressure on Lowry to force an early throw on a 3rd and 26 that fell to the turf as his receiver hadn’t yet begun to look for the ball.

The Cardinals stopped a Chardon drive as the first quarter ended and the score was 14-0 after one.

The Cardinal offense seemed once again to be on their way to cutting the lead in half as Lowry was effective enough scrambling both in and out of the pocket to pick up a few first downs both on the ground and through the air.

Canfield had the ball on the Chardon 16 when disaster struck as Sulka, who had already made his mark on the game on offense, scooped up a fumble and returned it 90 yards for the score to put the Hilltoppers up 20-0. A Nathan Tager extra point made it 21-0 and Chardon was rolling.

The Hilltoppers would force Canfield into a three and out on the ensuing possession and the teams would trade stops as a keeper by Chardon quarterback Drew Fetchik would come up short on a 4th and 10.

The Cardinals would again take the ball deep into Chardon territory only to be thwarted once again by Sulka as he picked off a pass from Lowry, ending another Canfield scoring threat.

Pettyjohn would break free on a big run to the Cardinal ten with twenty-six seconds remaining in the half.

The drive would end on a 25-yard field goal with two seconds on the clock. After a squib kick to avoid a big return, Chardon would take a 24-0 lead into the break.

Canfield came out of the locker room having seemingly made the adjustments they needed to finish a drive, as Lowry found success with slants and quick hitters up the seams to avoid the relentless pressure from Chardon’s defense.

Lowry would eventually score on a keeper from one yard out and the Cardinals were on the board. After an unsuccessful attempt at a two-point conversion the Hilltoppers led 24-6 with 7:36 to go in the third.

Chardon looked to have immediately answered when Blake Barker took the ensuing kickoff back for the score but Chardon was whistled for a block in the back and the ball would come all the way back to the ten yard line.

The Hilltoppers would chew clock for most of the third quarter with the running game and eventually added a three-yard touchdown run on a keeper by Fetchik to cap off the 90-yard drive and push the lead to 31-6 after the extra point.

In the fourth quarter after yet another stop by the Chardon defense, the Hilltoppers would eat up almost four minutes on a drive culminating in a Pettyjohn one-yard touchdown run on 4th and goal. Tager would add the extra point to push it to the final score of 38-6.

The rest of the game would be played under a running clock as Chardon sealed their trip to the Division III State Final Four.

The Hilltoppers are 10-0 on the season and will take on Tiffin Columbian who was a 17-14 winner over Parma Heights Holy Name in the Division III Region 10 final. That game is scheduled for Friday, November 13th at 7:00 pm at a site to be determined. The site will be announced on Sunday, November 8th.

Canfield falls to 9-1 on the season.