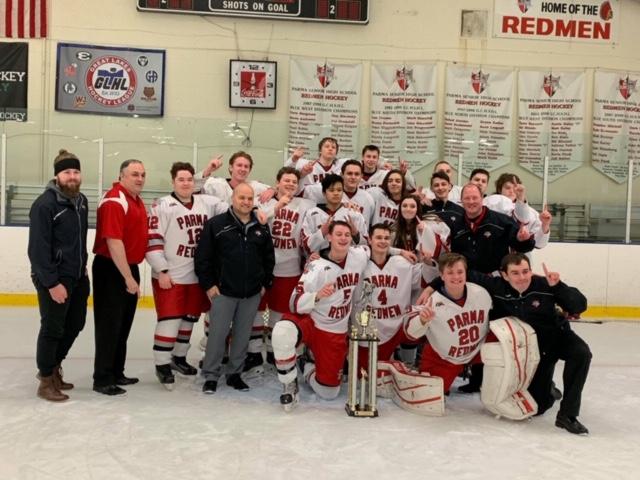 Alter struck first – 10 seconds after killing a roughing penalty. Will Augustine found the back of the net with assists to Jack Augustine and Spencer Morgan.

In the 2nd period, both teams ramped up their intensity as a fight broke out that led to 4 players – 2 from each team – heading to the penalty box.

The referees restored order and the teams settled down for a few minutes until Parma’s Matt Higginbotham evened the score on a pass from senior forward Matt Piech.

20 seconds later, another skirmish broke out that sent 2 more players to the penalty box. This time, the Redmen drew a 5-minute major for boarding, while the Knights were called for interference.

Alter had a man advantage for 3 minutes that ultimately led to a power play goal by Luke Dinkins (W. Augustine) with just over a minute remaining in the 2nd period.

The momentum shifted in the Knights favor, but the 2nd intermission gave the Redmen a chance to regroup.

A total of seven penalties were called in the 3rd period as the volume at Ries Rink grew louder with each infraction.

With Alter holding a 2-1 lead, Parma was called for holding with 4 minutes left in the game. The Redmen won the ensuing face-off and Higginbotham went racing down the ice on a feed from defensemen Robbie Gudin and Owen Arthur.

Here’s where things got wild…

One referee signaled that Higginbotham had scored, while the other referee came over to discuss the call, as the net had been jarred loose.

Fans, players and coaches all began shouting as the referees spoke for what seemed like an eternity, despite the conference lasting about 15 seconds.

Ultimately, it was determined that Alter’s goalie intentionally dislodged the net and Parma would be credited with the short-handed goal.

With the score tied at 2 and 3:55 left in the game, both teams battled hard for the Parma Holiday Tournament trophy.

Parma goalie Colin Pinson had several clutch saves in the closing minutes, while Alter goalie Sigurd Peterson had been sharp all evening with 38 total saves.

In the end, it was Higginbotham that came to the rescue for the Redmen, completing a hat-trick with 0:43 seconds remaining (Piech, Ryan Myers) to give Parma a 3-2 lead that they held in the closing moments of the game to hoist the tournament trophy.

Pinson had 23 saves for the Redmen, whilecoach Joe Gaudino earned his 202nd program victory with the win.

Credit to the Alter Knights, who traveled 3 hours during winter storm Harper to dominate round robin play. Their players, coaches and fans gave Parma an exciting battle in the tournament finals.

They’ll travel back to Dayton with some hardware of their own as tournament runner-up.