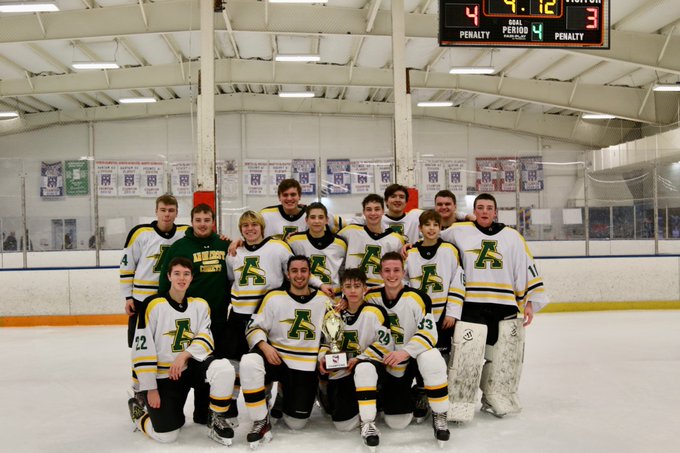 For the second straight season the Amherst Comets are Southwestern Conference champions in high school hockey, as Monday afternoon they took home a 4-3 overtime win over the North Olmsted Eagles.

The Comets, who were the one-seed in the tourney, won the championship when Jacob Kramer tipped in his second goal of the game in overtime to clinch the victory.

The Eagles were led by Shawn Donovan, who scored a pair of goals in the setback.

North Olmsted opened the scoring with a Donovan goal with an assist from Jake Hirz with 13:52 left in the first to make it 1-0.

The Comets responded as Jacob Fekete scored on a rebound with 4:22 to play in the opening period to make it 1-1 after the first.

Kramer’s first goal of the game gave the Comets a 2-1 lead with 11:39 left in the second period. The score would remain 2-1 Amherst after two.

The Eagles tied it back up at two apiece on a Riley Vertosnik shorthanded goal with 9:40 left in the third.

Donovan’s second goal of the game put North Olmsted up 3-2 with 5:40 left. Amherst responded as Fekete knotted it up at three with 3:25 to play.

Both teams defenses stepped up for the final three minutes to send the game into overtime before Kramer sent the Comets to the win.