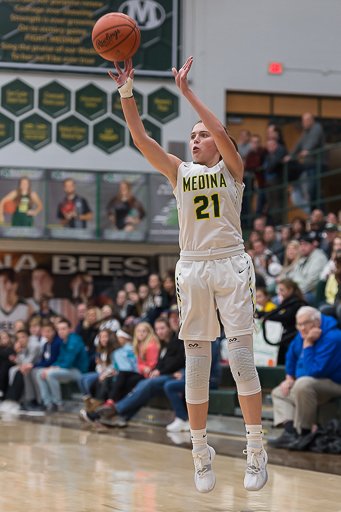 The perfect season for the Medina Lady Bees continued on Wednesday night, as led by sophomore sharpshooter Elizabeth Stuart they won a GCC matchup over the Mentor Lady Cardinals 60-47.

Stuart popped in a career-high 21 points in a hurry, with all points coming in the first half, as the lady Bees improved to 16-0 on the season.

Madison Luthy poured in four 3-pointers of her own en route to 16 points and Sarah McKee matched that total while going 6-for-6 from the free throw line and adding seven rebounds.

Medina will host Wooster on Saturday night in a non-league contest.

Mentor will be back on the court on Wednesday, January 23rd in a home non-conference game against Lake Catholic at 7:30pm.