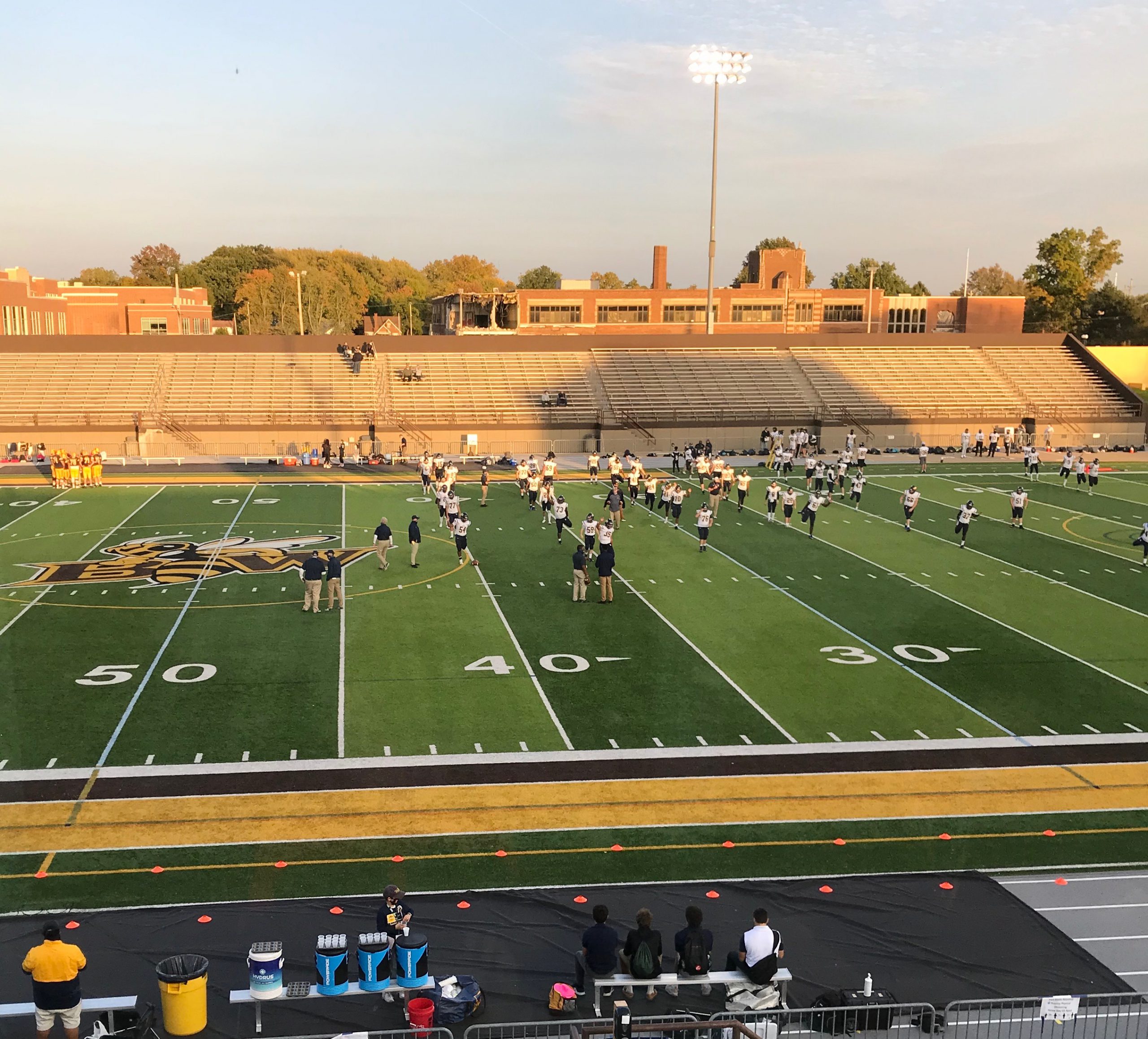 The 5th seed St. Ignatius Wildcats jumped out to a quick 21-0 lead on Friday evening and never looked back, defeating 12th seed Solon 42-14 in a Division 1 matchup at Finnie Stadium in Berea.

The Comets put themselves in an immediate hole with a three-and-out followed by a negative yardage punt on the first possession of the game. St. Ignatius needed only five plays to get on the scoreboard. Junior running back Marty Lenehan covered the final three yards for the Wildcat touchdown.

Another Solon three-and-out gave St. Ignatius the ball near midfield. On second down, junior quarterback Joe Pfaff threw a strike down the middle to Steven Bodamer. The Wildcat junior receiver outreached the Solon defender in full stride and scored, the play covering 48 yards.

The St. Ignatius defense forced a third Solon punt on the ensuing series and took over at their own 41. On the third play of the drive, Pfaff again spotted Bodamer deep, this time near the left sideline.

It was a 34-yard connection, with Bodamer ruled out of bounds at the Solon 1-yard line. Pfaff carried it in on the next play, and the Wildcats had a 21-0 lead with 1:50 remaining in the first quarter.

A mishandled punt return by Solon gave St. Ignatius a chance to add to their lead early in the second quarter, but a missed field goal gave the ball back to the Comets.

The Solon offense suddenly came to life as the Comets put together their best drive of the game, covering 80 yards in 11 plays. A 5-yard touchdown pass from senior quarterback Pat McQuaide to senior wideout Caesar Salerno cut the lead to 21-7 with 4:28 left until halftime.

St. Ignatius reestablished a 3-score advantage on the first possession of the second half. Lenehan scored his second touchdown, going five yards off right tackle to finish off an 11-play, 76-yard drive.

Solon rallied again after taking possession late in the third quarter. A 17-yard pass play from McQuaide to Salerno gave the Comets first-and-goal at the Wildcat 1-yard line as the quarter ended. Solon senior running back Kahlil Eichelberger covered the final yard for the touchdown to make the score 28-14 with 11:52 left in the game.

Lenehan, who totaled 171 yards rushing for the game, gained all 70 yards by himself on a 6-play drive that extended the Wildcats lead to 35-14.

The final score of the game came on a 23-yard touchdown pass from Pfaff to senior receiver Jonathan McNeil.

St. Ignatius had 370 yards of total offense, nicely balanced at 180 rushing plus 190 passing. Solon, led by Eichelberger’s 109 yards rushing on 23 attempts, finished with 260.

The Wildcats will advance to play Euclid in week two of the playoffs. The Panthers were a 21-0 winner over Elyria.

Are You Ready for Some High School (Playoff) Football?!
HS Football: Stow-Monroe Falls Runs Away From Cleveland Heights 45-14