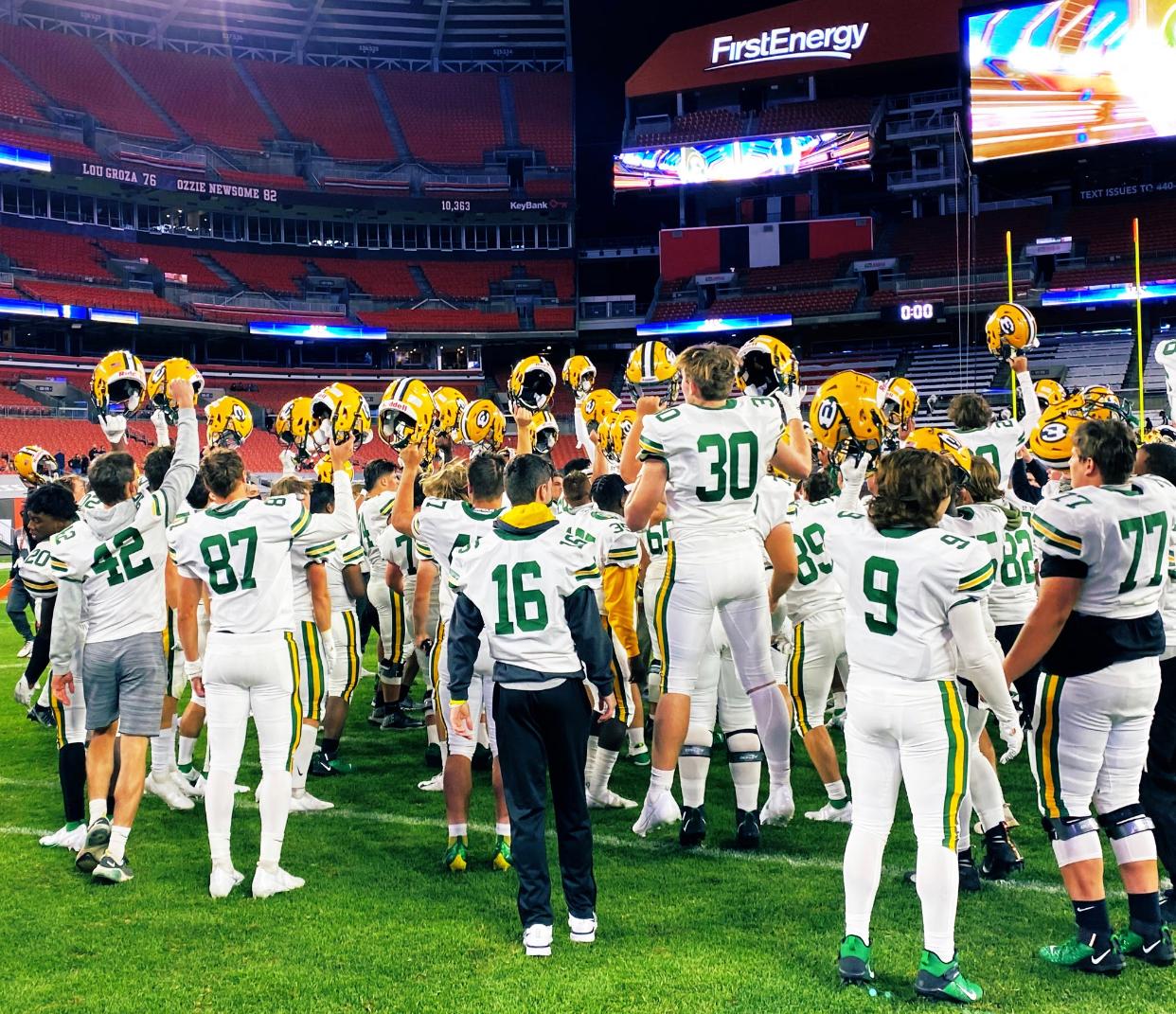 CLEVELAND – Nothing has been normal in the year 2020, so why would this edition of the “Holy War” be any different?

Playing one of the state’s biggest rivalry games in a stadium filled only two percent of the way made for a unique atmosphere that may not be duplicated for the remainder of this historic rivalry.

The only thing more bizarre than the environment was the play on the field in the first half.

St. Ignatius fumbled the ball away four times in the opening half, including a pair that were lost deep in St. Edward territory.

The closest the Wildcats got putting a touchdown on the board in the half was after a Marty Lenehan punt return put his team at the opposing 12-yard line.

However, like most scoring opportunities in this game, Ignatius fumbled it away.

The first points went up on the board with 9:14 in the second quarter, when Christian Ramos connected with Malachi Watkins for a 12-yard touchdown pass.

Ignatius actually outpaced Ed’s in total yardage through the first half. They battled down into the red zone late in the second quarter, but the drive stalled and they missed a field goal to keep the score at 7-0 heading into the break.

After forcing four fumbles in the first half, the St. Edward defense came out just as strong the rest of the way.

After forcing multiple punts, a deep completion from Christian Ramos to Josh Kerekes set up a 22-yard field goal by Noah Rios, making the score 10-0.

Ramos delivered a tough blow on the first play of the fourth quarter; A 34-yard touchdown run to put the Eagles ahead of the struggling Wildcats 17-0.

Ramos led the Eagles with 25 carries for 75 yards, while adding an additional 100 yards through the air.

Shortly after, Georgetown commit CJ Hankins intercepted a pass that ended a solid Ignatius drive, and ended any hopes of a comeback.

This interception marked the fifth turnover forced by this stingy Eagles defense. These miscues were too costly for Ignatius to overcome, as they fell 17-0 in this rivalry matchup at FirstEnergy Stadium.

While St.Edward also had its fair share of mistakes, St, Ignatius had even more. Nobody on the Wildcat sideline will make any excuses for being shut out in one of the biggest games of the year, however they did get off to a delayed start to the season.

The only tuneup game for Ignatius was last Saturday against non-OHSAA sanctioned Columbus Bishop Sycamore. On the other hand, St. Edward had played three games against top tier opponents, earning victories against Massillon Washington and Mentor.

Ignatius quarterback Jaxon French was able to pick up 196 yards through the air. However, the lack of a running game and inopportune turnovers led to the offense being shut out for the first time since 9/21/19.

St. Ignatius (1-1) will travel to Massillon Washington (3-1) next Friday, while St. Edward (3-1) will have an easier task next Saturday when they host Columbus Bishop Sycamore (0-3).