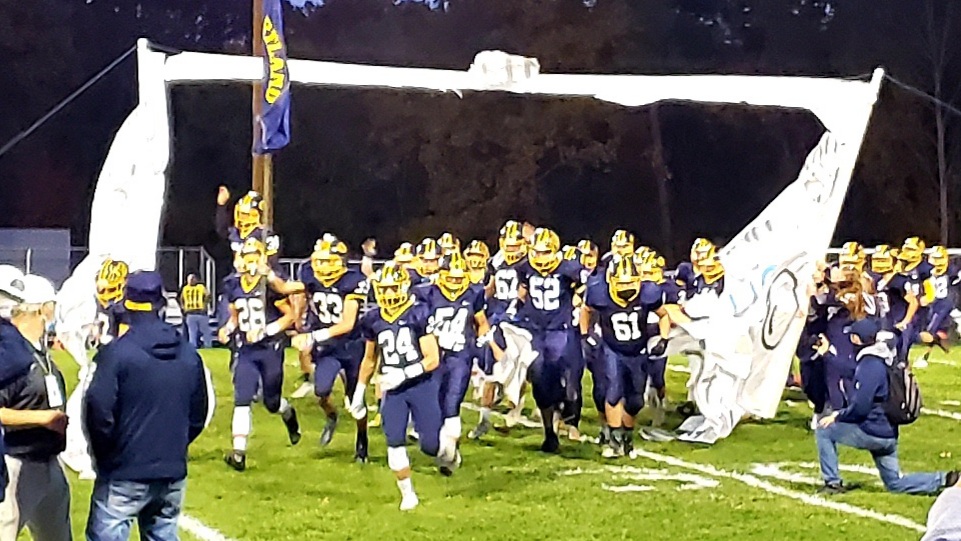 KIRTLAND, OHIO – The chill in the air helped it feel like just another typical night of high school football in Northeast Ohio in what has been a decidedly odd season. The product on the field in Kirtland helped maintain a feeling of normalcy as well, resulting in the 200th career victory for LaVerde.

The Hornets used a stifling effort on defense to set up their offense with numerous scoring opportunities and the offense did not disappoint in a 42-0 win over Akron Manchester on Friday night.

The Panthers were only able to muster 84 yards of total offense against a very stingy Kirtland defense and never got close to scoring. Kirtland did all their damage in the first half. The second half of the contest was played under a running clock per the OHSAA point differential rule.

Kirtland started hot, with Joey Grazia returning the opening kick to the Manchester 34. The excellent starting field position wouldn’t lead to an opening-drive score, however it would set the tone for the evening. A few uncharacteristically sloppy penalties stalled the opening drive for the Hornets, but Gage Sullivan pinned the Panthers at their own 5-yard line with a great punt.

Kirtland would force Manchester into a 3-and-out and the ensuing punt went off the side of Panthers punter Kenton Duty’s foot and out of bounds at the Manchester 33-yard line. Kirtland would not squander this field position. On a first and goal at the 3-yard line, Anthony DeMarco took the ball into the endzone for the Hornets and after the extra point, Kirtland led 7-0.

After another punt by Manchester, Kirtland again started inside Panthers territory at the 44-yard line. DeMarco would again run for a touchdown, this time from 10 yards out to give the Hornets a 14-0 lead with 4:18 left in the first quarter.

On Manchester’s ensuing drive, they finally broke into Kirtland territory. Panthers head coach, Jay Brophy would call a timeout on 2nd down and 10 shortly after Manchester had picked up a crucial first down on 4th and 1. The thought of a trick play or some kind of misdirection loomed large for the Panthers, who hadn’t yet found their groove offensively.

Quarterback Trent Pappas pitched to Kenton Duty for no gain on a play that took a long time to develop to the outside. Kirtland’s defense seemed to come alive on the play and the Hornets would force Manchester to punt once again.

After taking over at their own 29-yard line, the Hornets’ offense would immediately make the Panthers pay for their lack of creativity coming out of the timeout. Quarterback Liam Powers connected with Danny Davidson on a pass up the right hash and Davidson did the rest, taking it for the 79-yard score. The extra point extended the Kirtland lead to 21-0 and with 10:26 left in the half, the Hornets were completely in control.

On the next Kirtland possession, the Manchester defense forced them into a 4th and 9 at the Hornets’ 45-yard line. Kirtland brought the punt team out but the Panthers were flagged for defensive encroachment , giving the Hornets 5 yards and the comfort they needed to bring the offense back out to go for the first down. It was the correct call. Powers took the ball on a keeper and scampered 50 yards for the touchdown.

Kirtland would add two quick scores just before the half to put this one away and allow the starters to get a little break in the second half.

On a 3rd and 3 from the Manchester 29, Powers found Gage Sullivan open and Sullivan weaved his way through multiple defenders to find the end zone with 2:25 to go in the half. A Mario Rodin extra point would push the lead to 35-0.

Kirtland forced a 3 and out on the ensuing drive and after just 39 seconds of game time had lapsed since their previous score, Anthony DeMarco took the punt back 64 yards to find the end zone yet again for the Hornets. Another Rodin extra point made the score 42-0 in favor of Kirtland.

Kirtland outgained Manchester 374 – 84 and held Panthers quarterback Trent Pappas to just 4 of 19 passing for 28 yards in the game. Neither team turned the ball over.

Liam Powers led the way for Kirtland, completing 5 of 7 passes for 126 yards and the two touchdowns. He also had 4 carries for 61 yards and a touchdown in the contest.

Manchester sees their season end at 2-4.

Kirtland moves to 6-0 on the abbreviated season and will take on Magnolia Sandy Valley next Saturday at home. Sandy Valley were 35 – 20 winners over Martins Ferry and are 6 – 2.