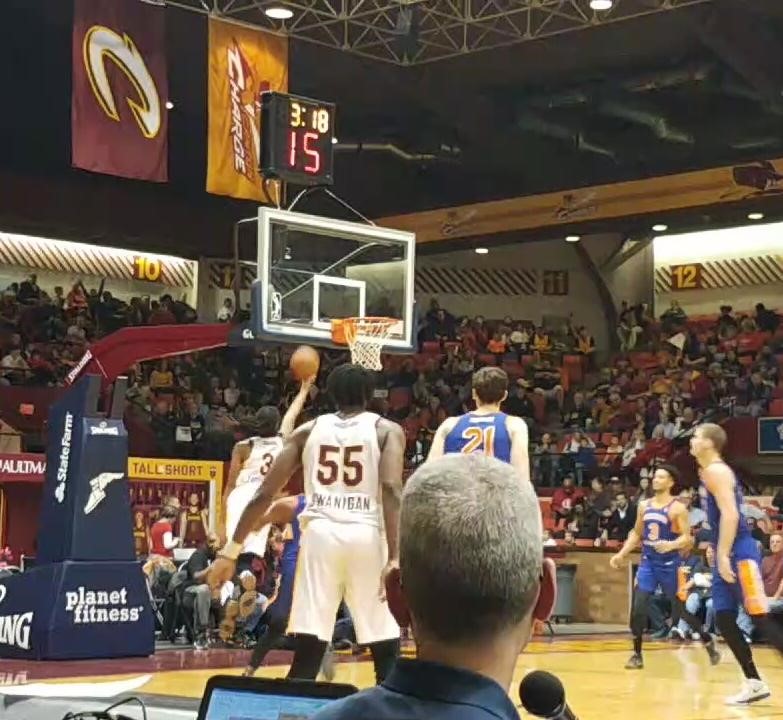 CANTON, OHIO – Saturday night started about as well as it could have for the Canton Charge. Charge fans are used to slow starts on cold Canton nights, unfortunately falling behind early has become quite routine for Canton in front of the home fans.

The Westchester Knicks scored the first two points of the game, then Canton scored the next 12 and never looked back en route to a 99-91 win.

Charge coach Nate Reinking felt early things were in Canton’s favor, “From the jump it looked like we were ready to play and we defended, we took control of the game. They hit tough shots to keep within striking distance. But we always had an answer.”

Canton’s starters combined for 84 point, lead by Cavalier Ante Zizic who tallied his third double-double of the season (21 points 17 rebounds.)

Zizic has had mixed experiences in his 17 games with the Charge but Saturday night he had a career high in both minutes played (37) and rebounds (17,) still only 21 years old the big man appears to be adapting to the American playing style better. “This game is very different. But at the end of the day basketball is basketball.”

Zizic is a man who is built to play basketball as he is listed at 6-10, 250 pounds, the Cavaliers have to hope he continues to develop as he was one of the pieces they received via the Kyrie Irving deal.

Charge coach Nate Reinking said last week that if his team reaches 25 assists and holds his opponent under 100 points they will win, both things were accomplished against the Knicks as they dished out 26 assists and held the Knicks to 91 points. The Charge really had the ball zipping around tonight, and the defense seemed to rotate extremely well.

“I believe in these guys, they’ve been there all year, they just haven’t figure it out on a consistent basis. Like we did tonight, and finish games.” Although the Charge were outscored by seven in the final quarter, they did shot a perfect 10-10 from the free throw line to as coach said “close things out.”

For a team that is 18th in the NBA G-League for three-point percentage the (45.5%) shot behind the arc Saturday night really helped the Charge offense have a nice balance.

The man who was a huge part of Canton’s success from three-point territory was none other the franchise leader in three-pointers made Marcus Thornton. Scoring 21 points, including five threes, Thornton seemed to hit big shots for the Charge from the opening tip.

With the win the Charge were able to send the Charge faithful away with a good memory as they won’t see the Charge home again until February 21st. Saturday night’s contest was the last of a four game homestand for Canton, a homestand they sandwiched two losses by two wins.

Coach Reinking knew winning tonight was important, “If we’re out on the road and we continue to do what we’re doing then I’m happy.”

The road trip features some winnable games as three of the four games (2 @ Windy City Bulls, @ Delaware) are against teams with losing records. As it stands the Charge are on the outside of the playoff picture but with 17 games remaining, there is plenty of time remaining to make a second half push towards the postseason.