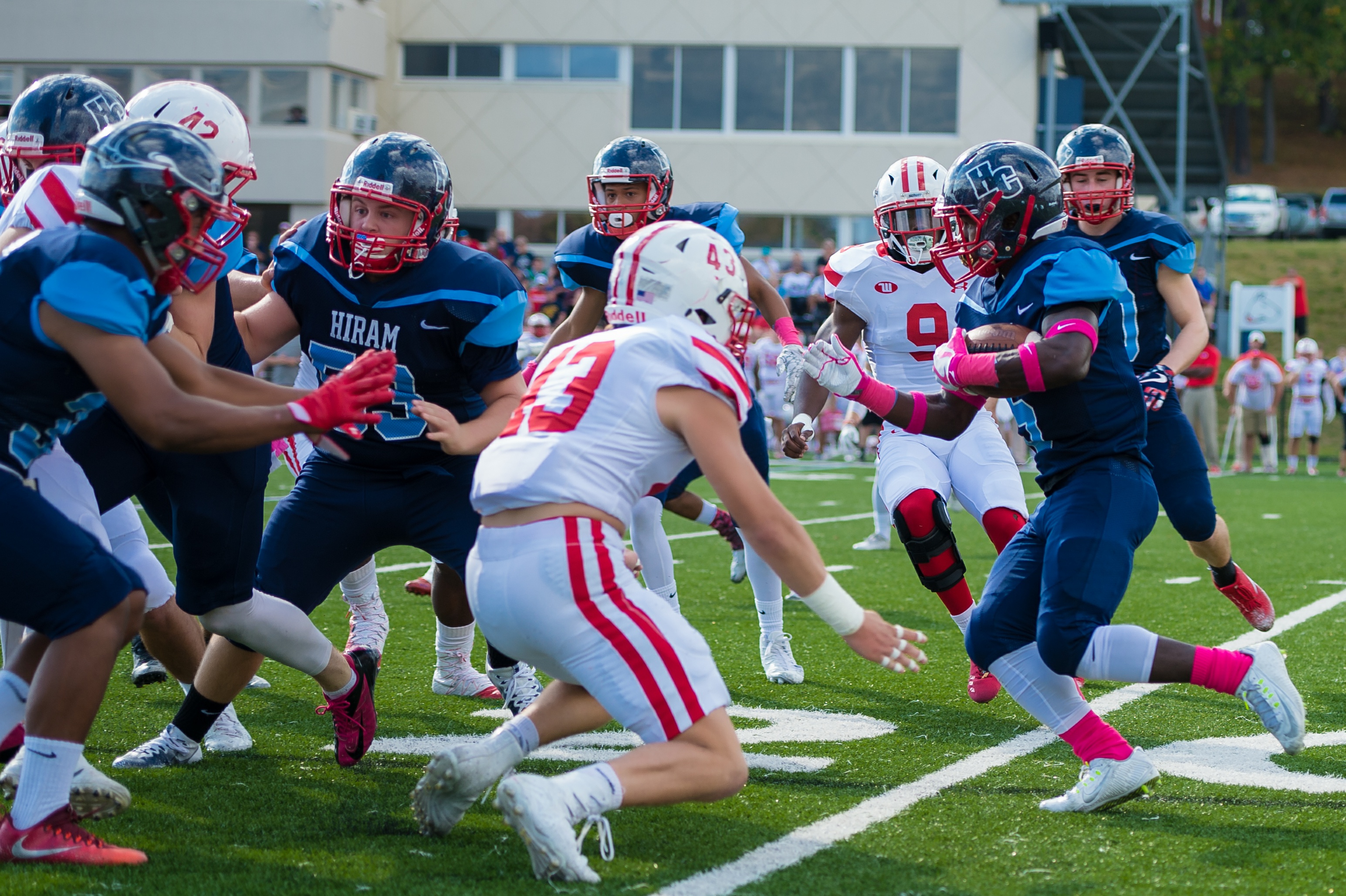 GAMBIER, OHIO – The Hiram Terriers outlasted the Kenyon Lords in a 62-56 scoring showdown.

There were a total of 17 touchdowns in Saturday’s matchup, with a grand total of 118 points scored in the game.

Hiram College would be the first to start off the scoring rampage with a 28-yard passing touchdown to Luther Fortson III with 6:52 remaining in the first quarter, capping off a one score differential in the game.

Kenyon would open up a four-play, 77-yard drive to find Ian Robertson in the end zone to even up the score at 7-7 with 14:56 left in the second quarter.

Hiram would go on to score the next two consecutive touchdowns, capping a one-yard rush from Danny Robinson, then a one-play, 75 yard rush for CJ Maner to push the Terrier lead to 21-7 with 10:33 left in the second quarter.

The Lords of Kenyon would retaliate with a six-play, 72-yard drive to get a 41-yard touchdown pass to Seamus McCurren to cut the lead to 21-14 with 7:30 remaining in the first half of the contest. Hiram would go back to the running game to get a 47-yard rushing touchdown from Danny Robinson, who would finish with 220 yards on 23 attempts and four touchdowns on the day.

The Lords and Terriers went on to each score one more time before halftime to put the lead at 34-21 in favor of the Terriers, scoring 55 points in one half between both teams.

Kenyon opened the second half with a two-yard rush from Thomas Murkle to bring the lead to 34-21 in favor of Hiram. Hiram College would score 90 seconds later with a successful 32-yard rush from CJ Maner. Maner would finish the day with 153 yards and two touchdowns for the Terriers.

Kenyon would come back to get another touchdown from Seamus McCurren, who finished the day with over 280 yards and three touchdowns. The score had been changed to 41-35 in favor of Hiram.

Hiram would keep the clock moving with a 5:07 drive to score with a 23-yard touchdown pass to Jarvis Foreman to push the lead to 48-35. Kenyon would end the high scoring quarter with a 28-yard pass to Ian Robertson, the lead would stand at 48-42 in favor of the Terriers.

The fourth quarter would result in two touchdowns for both teams. Kenyon would score the final points with 2:22 left in the fourth quarter. The final score stands at 62-56.

The Hiram College Terriers are now 2-4 overall and 1-4 in the North Coast Athletic Conference. The Kenyon College Lords fall to 0-6 overall.