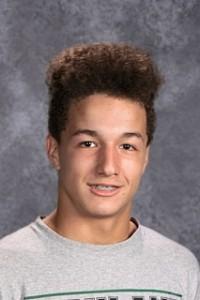 The Highland Hornet Nation has spoken loudly once again as Jake Rogers has won the Week 4 NEOSI Player of the Week Award!  Rogers, wasn’t even on the original ballot until a large outcry and storming of votes flooded NEOSI to put him on.  The rest is history as the masses have spoken!  Rogers, narrowly beat out Berea Midpark’s Trevor Bycznski to take home the award.

Rogers week 4 story is quite incredible, as he started off as a backup, but because of injuries and other situations that arose, became the star of the game this past Friday night against Theodore Roosevelt – Kent.  Rogers ran the ball 19 times for 235 yards, scoring 3 times.  His impressive performance helped the Hornets stay unbeaten.

The Hornets are 4-0 to start the season with blowout victories over Brunswick, Medina, North Royalton and Roosevelt.  The Hornets look to stay hot this week as the travel to take on Revere.

This award is thanks in part to our sponsors with NEOSI.  To learn how your small company can be the sponsor of this award and Highland football moving forward, please email Vince McKee at coachvin14@yahoo.com