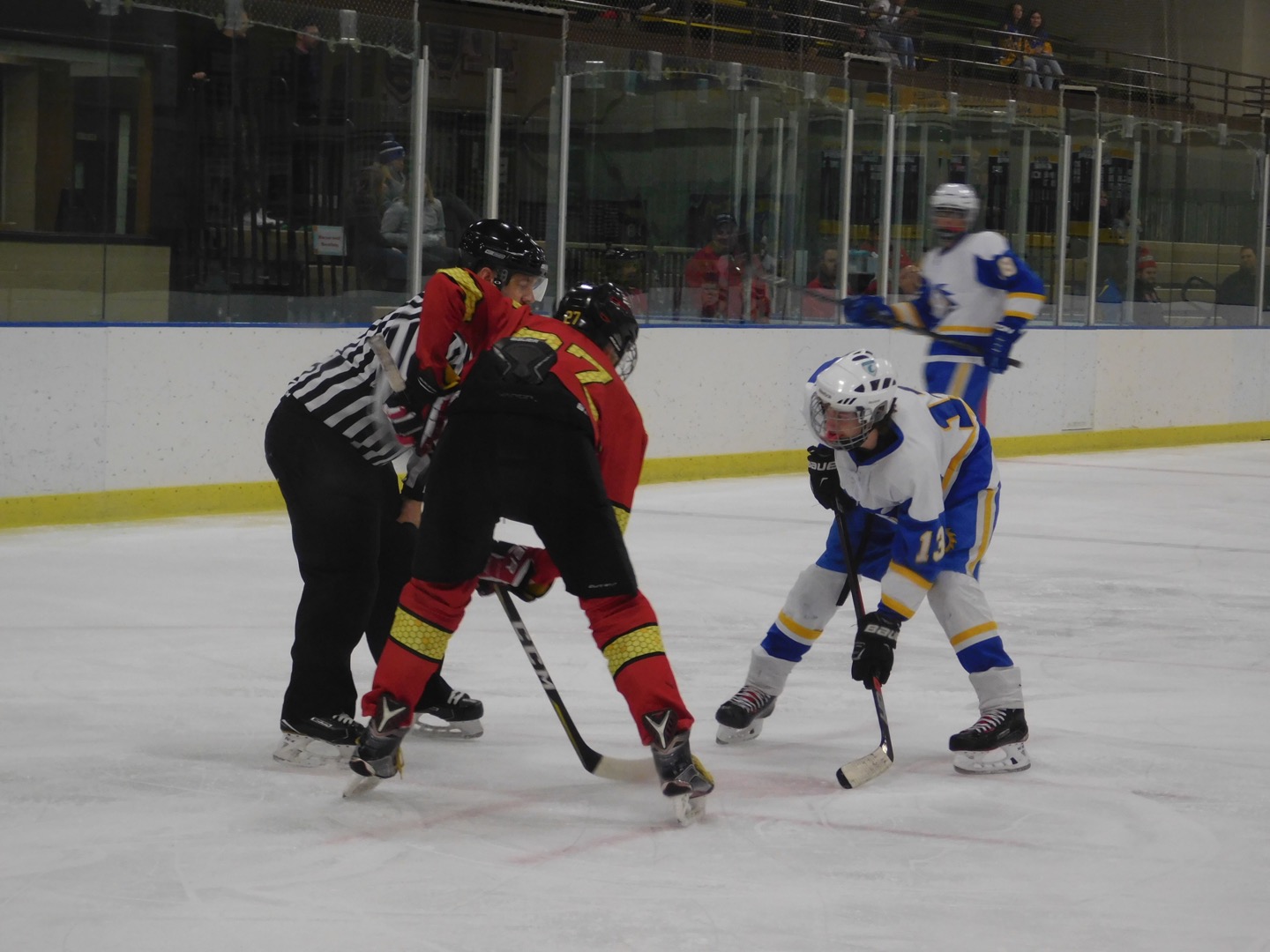 BROOKLYN OHIO – After not playing for six days after being upset in the first round of the Baron Cup, the Brooklyn Hurricanes found themselves in a dogfight with a Brecksville-Broadview Heights Bees team that won just four games this season.

The Bees had just tied the game at three with 5:33 to play, and it would have been easy for Brooklyn to chalk up what was a season that saw them win 17 games and be co-Blue South champs.

It was at that point though when Aidan Supek decided it was time to take over.

The Hurricanes leading scorer scored two goals in an amazing 15 seconds after the Bees tied it, and Brooklyn advanced to in the OHSAA Hockey Playoffs with a 5-3 victory.

“One of our senior leaders and our leading scorer said ‘I got it’ and put us on his back. Good players respond and I think he was the best player on the ice tonight.”

Supek was unstoppable, as he scored all five of the Hurricanes goals, but none bigger than the two that came just eight seconds apart after Brecksville had tied the game and were in position to possibly pull off the first-round upset.

The first Supek goal after the Bees tied it came from a simple rush to the net off the face-off, and he was able to get it between the glove and pad of Bees goalie Justin Blauman.

The clincher came again as Supek won the face-off, and this time took it to the left wing and fired a perfect shot that again got past Blauman to put the Hurricanes ahead by two goals.

It was a tough way for the Bees season to end, but they hung in with a good Brooklyn team that in the end relied on their best player to get them to the next round of play.

It took just 12 seconds in for Supek to light the lamp for the first time to give the Hurricanes the quick 1-0 edge. The assist went Hurricane senior forward Chad Schnear.

The Bees hung in, fighting off two minor penalties in the period which ended with Brooklyn holding a 1-0 lead. Brooklyn held an 18-9 edge in shots in the competitive first 15 minutes.

“I think we were still trying to get over what happened last week,” Kelber said of the early goal and Baron Cup upset loss to Mayfield.

“It was good to get that first early goal, but I think it came kind of too easy, and we got back into some bad habits where we were watching the play instead of initiating the play. Once we got moving it was a better end of the period.”

Much like the first period a goal was score quickly in the second, but this time it was the Bees converting to tie the game at one.

Senior Shaz Merchant scored for Brecksville with Nathan Beaver and Shahil Merchant getting the assists, but the tie game would not last long.

Brooklyn came back 16 seconds later as again it was Supek with his second goal of the game, this time the assists going to Matt Crossman and Brandon Chiv making it 2-1.

Supek struck for the hat trick at the 3:49 mark, again Crossman getting the assist to make it 3-1.

Brecksville converted a power play goal with 4:28 left in the second, poking a goal in after a scrum in front of the net getting it to 3-2.

Brendin Lewis got the goal for the Bees with Bryn Watkins earning the assist.

The third period was scoreless until the Bees managed to tie the game with 5:33 to play on the power play, as junior forward Creighton Hudock got the goal with Gage Glassner collecting the assist to tie the game.

Supek though put the game away with the two goals in eight seconds to give the Hurricanes the win. Brooklyn goalie Jason Edmonds stopped 28 of 31 Brecksville shots for the win.

“Good players make good plays,” Kelber said of Supek. “He really put us on his back.”

The win for the Hurricanes means a matchup with St.Ignatius on Saturday in Brooklyn, a team that is expected again to challenge for a state title.

“We know who we got ahead of us, just another game and all that, but we’re just going to go out there, have fun and play hockey,” Kelber said.

Click the Pages Below to See More Pictures From the Game between Brooklyn and Brecksville!