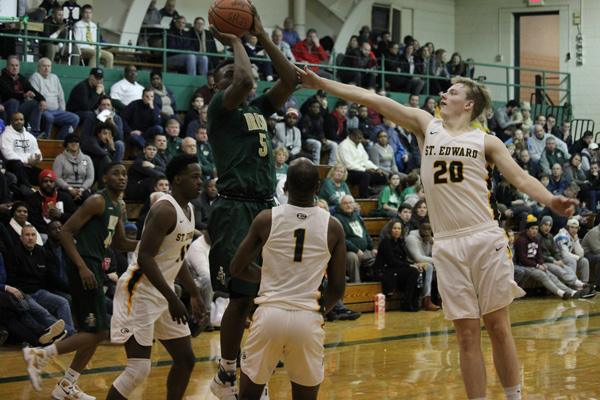 COLUMBUS, OHIO– The OHSAA released the statewide tournament brackets on Monday for boys basketball. Click on the links within the story to view the entire brackets for individual districts, and check out every bracket in the state here.

In the Akron/Toledo Region, local teams are playing in the Elyria and Strongsville Districts. Elyria is headlined by the Lorain Titans who have once again claimed the top seed. Olmsted Falls sits at two and Elyria at three, meaning a rematch of last year’s district final between Lorain and Elyria is once again a possibility.

In Strongsville, St. Ed’s leads the pack with the No. 1 seed, followed by Brunswick, St. Ignatius, Lakewood, North Royalton and Brecksville-Broadview Heights to round out the top half of the bracket.

All four brackets in the Cleveland Region consist of Northeast Ohio teams. First up is the Barberton District, headlined by Stow-Munroe Falls. Archbishop Hoban is at the No. 2 seed, followed by Green, Walsh Jesuit, Copley and Akron Ellet.

In Canton, Massillon Jackson has the top seed. Lake is at No. 2 and Canton McKinley at No. 3. Other Northeast Ohio teams in the district include No. 8 Glenoak, No. 9 Barberton, No. 11 Perry and No. 12 Akron East.

The Euclid District is filled top to bottom with area teams, with Solon leading the way at No. 1, followed by Brush, Mentor, Benedictine, Cleveland Heights and Mayfield in the top six spots. In the bottom half of the bracket are East Tech, South, John Hay, Riverside, North, Madison and Lakeside.

Rounding out Division I is the Solon District. Garfield Heights headlines a tough bracket at No. 1, while Cleveland Central Catholic and Shaker Heights will look to challenge the Bulldogs for the district crown in the other top spots. All three schools have byes through the first round.

Starting things off in the Canton Region is the Ashtabula bracket. Lake Catholic and VASJ claimed the top two seeds, followed by West Geauge at No. 3. Chardon sits at No. 5, followed by Glenville, Geneva, Perry, Harvey and Shaw.

St. Vincent-St. Mary leads the Canton District followed by Buchtel in the No. 2 seed and Tallmadge at No. 4.

In Stow, Gilmour Academy is the top seed followed by Revere, Woodridge and Warrensville Heights.

Moving on to the Bowling Green Region, there is the North Ridgeville District led by No. 1 Holy Name. Bay Village is at the No. 2 seed, followed by Clearview and Keystone.

Vermilion will play in the Mansfield District.

In the Canton Region, the Garfield Heights District is headlined by Lutheran East, Beachwood, Elyria Catholic and Kirtland. Area teams are also dispersed in the Salem District (No. 4 Canton Central Catholic), Wooster District (No. 1 Wellington; No. 12 Black River) and Lima District (No. 12 Fairview)

In Division IV, area teams will compete in their brackets for a chance to head to the Canton Regional.

Cornerstone Christian leads the way in the Orwell District that also includes No. 4 Richmond Heights and No. 5 Warren JFK.

Finally, the Struthers District features No. 4 Western Reserve and No. 7 East Canton.

An overview for every bracket in the state can be found here.