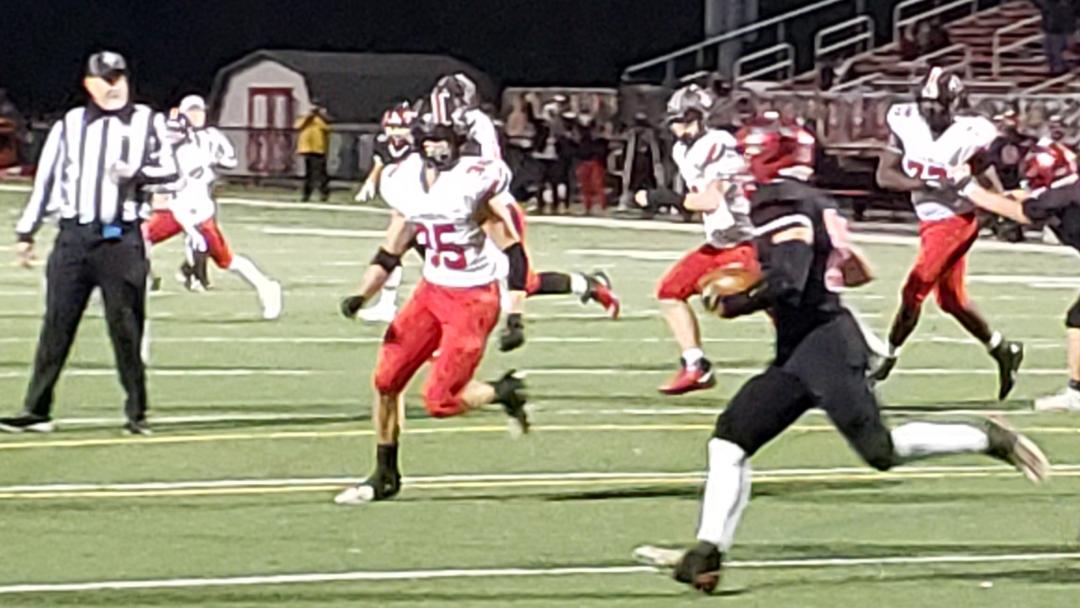 CHARDON, Ohio – The ghouls and goblins of Halloween had nothing on Chardon’s defense on Friday night as they continued to steamroll opposing offenses, shutting out New Philadelphia 31-0 in their Division III Region 9 semifinal matchup.

The Hilltoppers scored on their first possession on a one-yard run from Sean Carr. After the extra point Chardon led 7-0.

The Quakers appeared to be on their way to tie it up, moving the ball effectively through a very tough Chardon defense, but Quarterback Caden O’Neill was picked off at the goal line by Kevin Doyle.

Chardon was eventually forced to punt on the ensuing possession but their defense tightened up from that point on and New Philadelphia wasn’t able to muster much again for the rest of the contest.

At the end of the first quarter Chardon was holding on to the seven point lead. At the start of the second quarter a re-energized Chardon rushing attack, led by James Pettyjohn, brought the Hilltoppers to within nine yards out when Quarterback Drew Fetchik finished off the drive with a touchdown run on a keeper. The extra point made it 14-0 in favor of Chardon and it felt like they were rolling.

More stingy Chardon defense and a costly late-hit penalty out of bounds called against New Philadelphia helped contribute to a Hilltopper drive ending in a 37-yard field goal by Kicker Nathan Tager to take a 17-0 lead with 2:36 to go in the half.

Chardon would shut down another New Philadelphia drive to ride the seventeen point lead into the locker room at halftime.

The second half saw a possible New Philadelphia scoring drive end with an attempt at a 43-yard field goal that came up just short.

Chardon would add a Sean Carr touchdown run from seven yards out with 4:31 to go in the third quarter. The extra point pushed the lead to 24-0.

After yet another thwarted Quaker drive resulted in a punt Chardon would score the game’s final points on a second keeper for a touchdown on the night by Fetchik. The extra point would run the score to final mark of 31-0 and the game would finish under a running clock.

Chardon moves to 9-0 on the season and will host Canfield, also 9-0, in next Friday’s Division III Region 9 championship game. Canfield was a 24-6 winner over Streetsboro on Friday.

Kickoff is scheduled for 7:00 pm at Memorial Field in Chardon.