Heartbreaks Since 1999: Top 10 Browns Losses Since the Rebirth of the Franchise 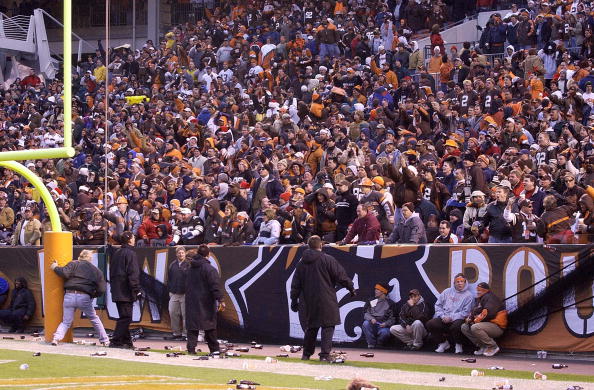 One thing about the Cleveland Browns – since they’ve returned in 1999, they’ve found more inventive and heart-breaking ways to lose games than any other NFL team.

Sunday’s last-second 26-23 overtme loss by the Browns to the Denver Broncos was the latest in a long line of “Only In Cleveland” improbable losses.

The Browns had multiple chances to win the game, even picking off a Peyton Manning pass in overtime, only to squander the shot to win the game, then allow Manning to march down the field to allow a field goal for the loss to put the team at 2-4 on the year.

Andrew Clayman from the site Waiting For Next Year compiled a list of all 42 instances in which the Browns had defeat snatched from the jaws of victory in the final minute since the franchise returned in 1999. Whatever you do, avoid being around sharp objects or listening to songs from The Cure while reading this article because chances are good you may feel suicidal when you are done.

What I’ve decided to do is take that list of 41 and whittle it down to the 10 most memorable (or most heartbreaking) of those last-second losses.

The more unique the circumstance, the better chance it got on the list. I did not include the Browns’ 36-33 loss in the 2002 playoffs to the Pittsburgh Steelers because I wanted to limit it to regular season games (and, also, because that game is still a sore subject).

Because it’s so new, I did not include Sunday’s loss in this list. Instead, and because I feel like torturing myself and you, I found 10 others. Enjoy.

When it Comes To Identity, The Browns Appear to Have None
Browns at Rams NFL Week 7 Capsule