Great Second Half Propels Cavs to 122-100 Victory Over Raptors 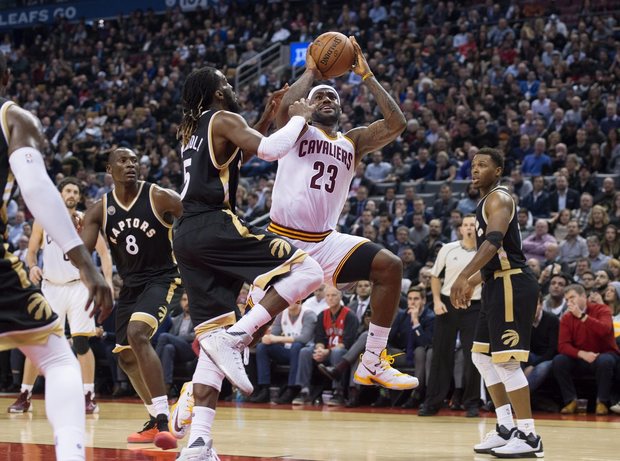 The Cavaliers ended their quick, two-game home-stand at Quicken Loans Arena on Monday night against the Toronto Raptors. Toronto held their own, but the Cavs were on fire in the second half, pulling away to win 122-100.

It was a back and forth contest for most of the first three quarters, as the Raptors showed they were not intimidated by the Cavs, who have been dominant at home this season, with a record of 14 and 1 at the Q heading into the night.

Both teams started out hot on a cold night in Cleveland, as the Raptors shot 5-for-8 and the Cavs shot 6-for-8 in the first four minutes of the game. It was 13-11 in favor of Cleveland during that stretch.

The Cavs stayed hot as Toronto cooled off, and the ball movement was beautiful for the Wine and Gold, as the Cavs opened up a 26-13 lead, due in large part to J.R. Smith going three-for-four from beyond the arc to start the game.

Raptors’ point guard Kyle Lowry would not let the run last any longer, bringing his team back to within five with 2:39 to play in the first quarter. The Cavs would finish the quarter strong, heading into the second leading 33-29.

Toronto kept it close in the second quarter, as the duo of DeMar DeRozan and Lowry was on display. Both scored 14 in the first half.

The Raptors grabbed the lead briefly, going up 50-49 with 3:50 to play in the second, but Cleveland would fight back and enter halftime on top, 58-56.

Toronto had an impressive road crowd compared to most games in Cleveland and their team’s effort was present all night, as they hung with the Cavs in the third quarter, but LeBron James led the Cavs on a run late in the quarter, giving Cleveland a 90-78 advantage heading into the fourth. LeBron scored nine points in the third quarter. He would finish the night with 20 points and seven assists, resting the entire fourth quarter.

Cleveland kept their great second half going and built upon their lead, going up by as many as 20 with 4:13 to play.

The Cavs depart from Cleveland for a six-game road trip, which starts Wednesday in D.C. against the Wizards.

J.R. Swish
J.R. was feeling it at the Q. He hit eight three-pointers on 14 attempts from beyond the arc, scoring 24 points.

Cavs’ point guard Kyrie Irving had a nice duel going on with Lowry, who is worthy of consideration to start in the All-Star Game. Lowry kept his team in the game for the first three quarters, putting up 23 points with ten assists, while Irving was impressive, as well, scoring 25 points on an efficient 10-of-16 shooting. He dished out eight assists on the night, as well.

DeRozan was one half of the two-headed monster for Toronto, scoring 19 points, throwing down a few ferocious dunks.

Tristan Thompson, the Canada-native, had one of his best games of the season against the team from his homeland, putting up 14 points and 11 rebounds. The Cavs are 4-0 since he took over the starting center role a week ago in Phoenix.