Does a Good Night at QB Lock Up the Browns Starting QB Job for Brock Osweiler? 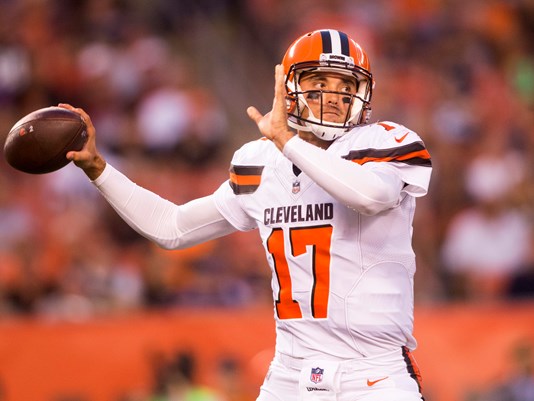 The Browns are getting set for their second preseason tussle of the season as they take on the New York Giants under the lights of Monday Night Football at First Energy Stadium this evening.

The team might be on the cusp of naming a player who was thought to be nothing more than a piece in a trade at the start of free agency as their starting quarterback should that player have a decent showing tonight.

The player of course is Brock Osweiler, who the team acquired on the first day of free agency, and with a good showing tonight according to NFL Network’s Ian Rapoport, he could very well get named the starter for the opener on September 10th against Pittsburgh.

A solid night could lock up the #Browns job for Brock Osweiler. Hue Jackson solicited opinions of vets: Majority believed Brock is the guy.

Osweiler didn’t light it up in the first preseason game against the Saints, going 6-for-14 for just 42 yards, but it’s sounded for awhile like he’s going to be the guy to get the first chance at the QB spot.

Even veteran Joe Thomas stated as much last week that Osweiler looks to be the guy come opening day. A good showing tonight sounds like it will make it official.

Why #Browns QB Brock Osweiler is the clear favorite to win the starting job, in part because he has the locker room support… pic.twitter.com/qx61djklAw