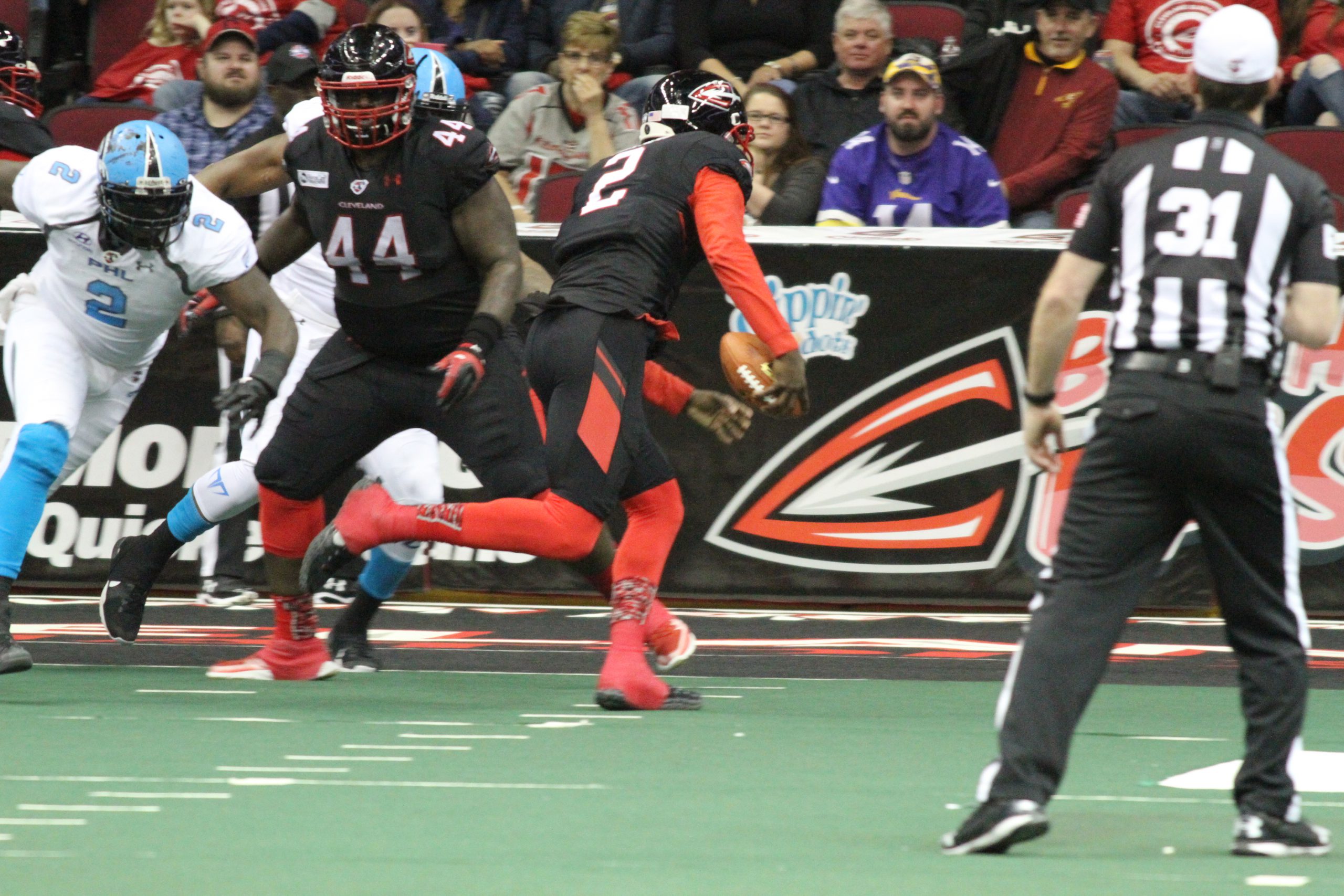 PHILADELPHIA – Saturday night brought about the last road game for a few weeks for the Cleveland Gladiators that were coming off a big win last week over the Washington Valor improving their record to 2-6 on the season.

Despite coming out very strong and dominating the first half of football, they came up short to the first place Philadelphia Soul at Wells Fargo Arena in Pennsylvania, 59-49.

Statistically, the Gladiators had their numbers stacked up against the Soul as they continued to connect and put the ball in the end zone. Arvell Nelson put the first score in behind some well-executed blocking.

Nelson was able to put together some great offense with receivers Quinten Sims  for back to back touchdowns but on the second score, there was a blocked PAT that left the score 20-9 wth plenty of time remaining on the clock.

It wasn’t long before the Soul mounted an assault that brought the score to 20-16 from the arm on Raudabaugh with a 40 yard bomb to Kauleinomoku.

After another touchdown from Nelson, the Gladiators’ Brackens busted through with a two-point conversation which put the Glads up heading to the half by a score of 28-16.

Until, a 14-yard bullet from Raudabaugh to Reynolds brought the game close 28-23 as the final seconds of the first half expired.

The Soul started the scoring in the second half when Raudabaugh tossed his fourth touchdown pass of the game, this time a 10-yarder to WR Ryan McDaniel to give Philadelphia their first lead of the game, 30-28.

Cleveland answered right back when Nelson connected on his third touchdown pass of the game, finding WR Michael Preston for a nine-yard touchdown to re-claim the lead for the Gladiators, 35-30 with 5:59 left in the third quarter.

The Soul responded with two more big-play touchdowns, with Reynolds hauling in 44 and 34-yard scoring strikes from Raudabaugh to give Philadelphia a 44-35 lead with 10:51 left in the game.

Nelson found Sims on the next drive for an 18-yard touchdown but the extra point would be blocked once again and returned by the Soul for two points, giving Philadelphia a 46-41 lead with 7:59 left in the contest.

Reynolds scored for the fourth time, an 11-yarder from Raudabaugh on the ensuing drive. A failed two-point conversion gave the Soul a 52-41 lead with 6:06 left in the game.

After a Cleveland turnover, Soul FB Mykel Benson scored from four yards out to put the game out of reach, 59-41. Nelson found Preston on the next series for a six-yard touchdown to cap the scoring for the night, 59-49.

Next up for the Gladiators is a Friday night home tilt vs. the Baltimore Brigade in Week 11 with full coverage, live from Quicken Loans Arena at 7:00pm. The game can be streamed live on Twitter and heard on 92.3 The Fan and WHKZ 1420 AM. Stay tuned to NEOSI for continued coverage and developing news and updates.