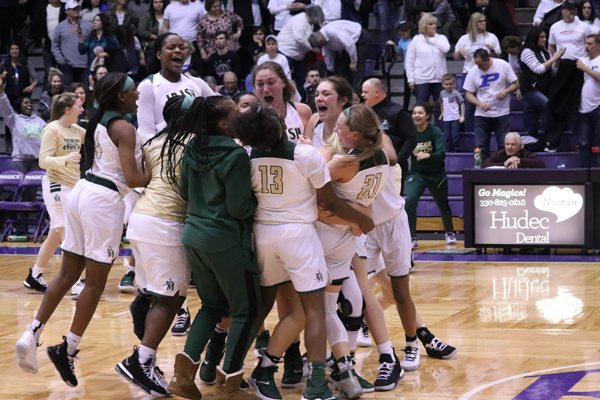 Coming into Friday’s contest the Saint Vincent Saint Mary’s Girls Basketball team had to face one of the top teams in DII in the Poland Seminary Bulldogs with a 24-0 record.

Based on records this would like a mismatch, but as the season has gone on the strategy for STVM started to change with the development of Freshman Lanae Riley and a move away from the fast paced up and down style with great outside shooting from three.

In the post season the emphasis on getting the ball inside to the STVM “Big Three” of Seniors Aubrie Marsh and Sophia Williams, along with Riley has been the key to getting STVM to the Barberton DII Regional Final.

From the tip STVM made sure Poland Seminary would have to overcome their usual pressure defense, and the steady diet of shots from inside the paint.

It was clear that Poland Seminary would need to overcome these two factors to not only stay in the game but to win the game. The tone was set by Riley with nine points all in the paint to give STVM a 19-12 advantage.

The defensive intensity continued from STVM in the second quarter but two big three’s from Poland Seminary Sophomore Jackie Grisdale kept the bulldogs in the game. STVM went into halftime with a 32-24 lead.

In the third quarter Poland Seminary come out with renewed energy and started to turn the game around into their favor. With 1:33 Left in the 3rd Poland Seminary cut the lead to 2 at 38-36.

STVM (18-9). Held on to their slim lead to end the quarter at 38-36. Poland Seminary out scored STVM 1 -6 in the 3rd quarter, the key to this run was going ⅚ from the free throw Line and baskets from Senior Sarah Bury and Grisdale who chipped in four and five points respectively.

In the 4th quarter STVM went back to what put them in control of the game by packing it into the paint with their size advantage. Going Back to this strategy put STVM on the free throw line.

Senior Maria Dobson would go ⅞ down the stretch to help seal the 56-46 victory and a birth in the DII Ohio State Finals.

Poland Seminary (24-1) Head Coach Nick Blanch was proud of the way his team played and with all the media attention his team kept the same approach to win the games one at a time. In this game he felt the STVM size wore his team down in the paint. The constant pounding on the inside gave STVM the offensive advantage.

Dobson said “with our size we had to pack it in on the defensive and offensive ends.” When asked about the crowd noise from the Poland Seminary Student Section, “ it was all about the team and the five on the court.”

For STVM Head Coach Carley Whitney the key was the team Motto for the season of winning 4 quarters. If there team did that they would win the games they needed to.

At one point STVM was 2-5 on the season and with the development of its underclassmen through the season was key to this postseason run.

One of those underclassmen was Sophomore Dream Cherry who contribute 5 points but is was her attacking style on offense and her effort on defense that was huge throughout the night. She felt Cherry was due a game like this as she kept learning her role during the season.

She was also proud of her seniors who she expect to finish down the stretch of the game from the free throw line and in the paint. Whitney on senior Dobson, “I will win or lose with Maria Dobson.”

STVM will look to go for the Double in knocking off the other #1 Team in DII Dayton Carroll on 03/14/2019 at 6:00pm in Game 1 of the DII State Final Four at Ohio State Univ. – Schottenstein Center.

Note: Dayton Carroll and Poland Seminary ended the season Ranked tied for number one in the final DII AP Poll.