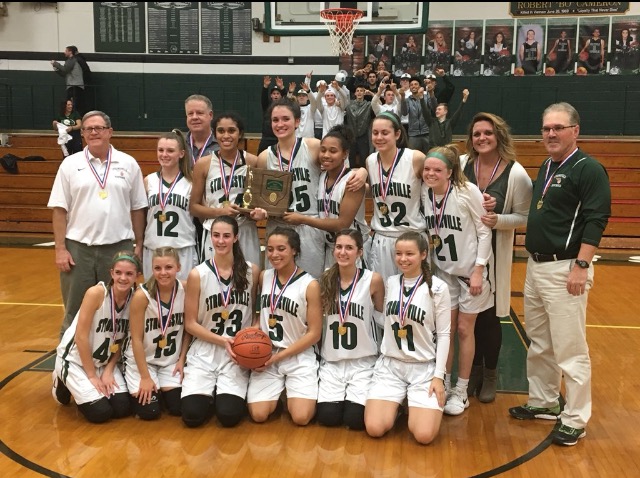 Less than 30 seconds into the second quarter, Shannon Carr, who had 17 points in the semifinal, picked up her third foul of the game and got sat down for the remainder of the quarter. Early in the quarter, Strongsville brought it to 14-14. Olmsted Falls went on a 9-0 run to take a 23-14 lead before Strongsville scored five unanswered points to keep the deficit manageable at 23-19 heading into the locker room for halftime.

The fourth quarter was not kind to the Bulldogs. Strongsville continued a 14-0 run that was started in the third quarter to take a 41-32 lead. In the fourth quarter, Reagan Bass shot 4-of-4 from the field and added four free throws to have a 12 point fourth quarter. Bass finished with 21 points on 6-of-7 shooting and went 9-of-13 from the free-throw line.

“We didn’t keep the ball out of the paint because Strongsville did a really good job of making sure the ball got into the paint,” said Olmsted Falls Coach Jason Eaton about the 14-0 run. “It was our whole pregame and halftime thing. I give Strongsville credit for what they did because a lot of teams have a first half where they try to pack it into the paint and we get deflections, steals, and turnovers and they abandon it. I give Jeff [Eicher] a lot of credit for not abandoning it. For the most part, I thought we played really hard, did a ton of things right but Strongsville did more things right than we did. I give them a lot of credit because they earned it tonight.”

Strongsville will take on the winner of the Genoa District Championship game which will take place Saturday between Notre Dame Academy and the winner of Anthony Wayne vs. Sylvania Southview.