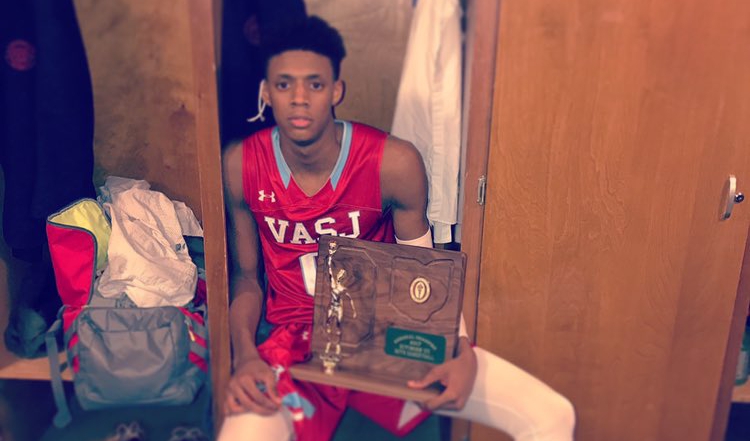 The 6-foot-8 forward was one of the key players on Villa Angela-St. Joseph’s 2017 state championship team, averaging 14.6 points and 6.9 rebounds per game in his sophomore season.

After helping to lead VASJ to its seventh state title in school history, he’ll join Coach Johnson at Garfield Heights for his junior season, where the Bulldogs figure to be right in the mix of Northeast Ohio’s top programs once again.

Garfield Heights reached a Division I regional final in March, falling to St. Edward in an overtime thriller, and will look to return to Columbus in 2018 with Gaffney as one of the team’s leaders.

Gaffney has been turning heads all summer playing with Ohio Basketball Club and erupting for a 41-point performance at Johnson’s NEO Youth Elite National Showcase in late-June.

He’s already made his fair share of highlight reel dunks over his first two high school seasons and Peatross notes the forward has improved his jumpshot since the end of the 2016-17 season, which will be an even bigger part of his game at Garfield Heights.

Gaffney is the No. 3-ranked 2019 prospect in the state of Ohio, according to 247 Sports’ Composite Rankings, near the top of an impressive class which features Pickerington Central standout point guard Jeremiah Francis and Gahanna Lincoln forward Jordan Mitchell.